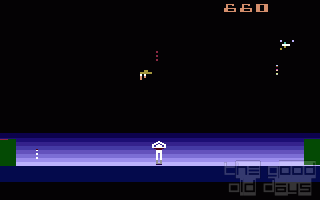 Space Cavern is the most complex Atari 2600 game I've ever seen, with a manual three times as thick as any other Atari 2600 game. There are countless different difficulty levels you can choose from when starting a game, selecting from options such as whether to have two or four enemies above you, whether or not to have any enemies from the sides, whether the enemies above are large (easy targets) or small, and whether the enemies above shoot straight or diagonally. All of these options are independent of one another, so you can mix and match.

In all of the variations, you stand on the ground and shoot up at the enemies above you, while trying to avoid their falling bullets. If you choose to have the side enemies as well, then you will also have to watch out for creatures coming out of the caverns to either side of you (which is where the game got its name). Fortunately the cave monsters don't shoot at you, they kill you by making contact. Strangely, in order to shoot right or left, you have to move the joystick up or down. Up fires to the right while down fires to the left. The fire button fires upwards.

You start out with four men, and get a free life at every 20,000 points. However, you can only have a maximum of four lives at any one point in time. In a two player game, the players alternate. Large Electrosaurus (the flying enemies) are worth 115 points each, small ones are worth 165 points each, shaggy Marsupods (the cave creatures) are worth 200 points each.

If you choose to play without the cave creatures, you can often just stand in your starting position while firing. However, if you choose to play with the cave creatures, remaining in your starting poisition (on the far right) is a sure way to get killed the instant the right-side creature appears. It is generally best to stay near the center of the screen, where you have manuvering room, and can see the cave creatures emerging before they can get you. One very annoying thing is when the Electrosauruses above you stop moving sideways. It is possible to get underneath them to kill them, but the timing is very tricky. It is also possible to shoot the Electorsauruses' bullets out of the sky, but your aim and your timing have to be very precise. Shooting their bullets usually just happens by accident. 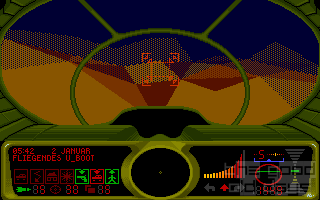