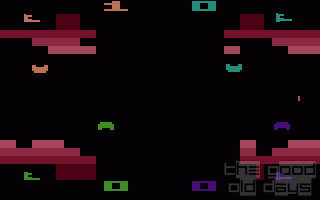 Warlords is very basic in gameplay, but is fun and fast action, and also allows for a certain level of strategy. In Warlords, you have four players (Always 4. If you have less than 4 human players, the rest will be computer controlled), and each player has a warlord, a castle, and a shield. This game uses the paddles instead of the joysticks. What you have to do is use your shield to deflect the ball away from your castle & warlord, while simultaneously trying to direct it -at- your opponents' castles & warlords.

The castles are a secondary line of defense, and you can lose them without losing the game. However, if your warlord is hit, you lose. Period. The castles sit in the corners of the screen, and the shields slide back and forth in front of them. One difficulty option is whether you can catch the ball by holding the button when it comes in contact with your shield (then trying to launch it at one of the other players) or if you can only deflect the ball. Another difficulty option is the speed of the ball (you can choose between fast or slow). The castles completely protect the warlords at the beginning of the game, but break when struck by the ball. The shields are indestructible, but only protect one small area at a time.

One thing that can be very annoying is when you play a one or two player game, and all the human players have been eliminated. You still have to sit there and watch the remaining computer players fight each other. The game isn't over until one player wins five times, so you can't simply start a new game instead of waiting for the computer to beat itself.

Another game option is called “doubles”. In “doubles”, each player controls two warlords.

Cypherswipe:
Feel free to share anything about Warlords (*) (1981) here!
[Reply] 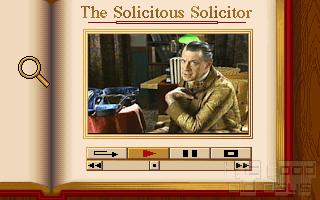