Uridium Plus
for C64
Also available for: C64 (Uridium) 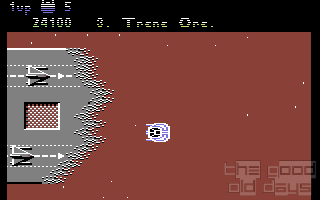 Uridium Plus, released the same year as the Uridium. Not much time to change anything, but also not much need to, since the original version was very successful - never change a winning horse. So the basics remain the same: The player flies the Manta ship's assault on the aliens' huge Dreadnoughts, first taking out the numerous waves of defenders, then landing and activating the self-destruct mechanism - all that to stop the invaders' supply of raw materials.

Just running the game and trying the first levels, the changes are hard to spot. Not even the title screen mentions the 'plus'. The most noticable change is that the player no longer has to wait for 'Land now' to flash on screen before he's actually allowed to land. So once you reach the landing strip, you can land (although it might not be the wisest choice to do so, because less kills means less points and thus less precious extra lives). For some reason, that message still appears after some time, but it's without any function.

On the technological side, this is one of the few games which uses the capabilities of the C128. Oh, sure, it also runs on a basic C64 (and it does so very well), but if it detects a C128, it shows even more flashy eye-candy-type effects (more background stars, more bullets flying around) which certainly can't hurt. Last, but not least, the reviewer's subjective feeling is that the 'plus' version is even harder. The latter might be the a questionable change, indeed.

That's it. Uridium Plus isn't a plus version like IK+ or Elite Plus (both of which are significant improvements) are. It's more of a data disk, but since the original is great, so are these levels. So, it's a great choice for successful veterans who have mastered the first game already, but due to its difficulty, maybe not the best point to jump into the series.

Mr Creosote:
Well, they have a huge amount of stationary guns plus lots of fighters defending. So it seems the designers followed the eggshell approach to security: hard on the outside, but once this is breached, there is nothing left.
Herr M.:
Hmm, actually the security holes in this game's capital ship design sounds even worse: Imagine Luke landing with his X-Wing on the Death Star and walking up to the self destruct. 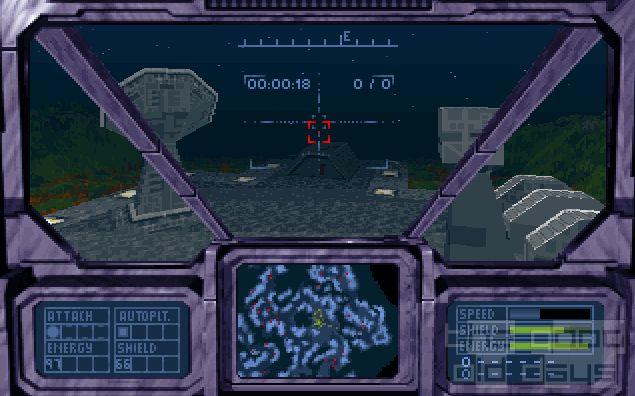