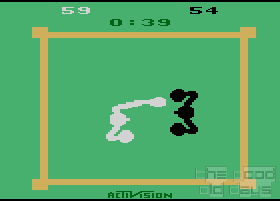 Boxing. I can hardly think of a less interesting 'sport'. Two sweaty fat guys beating each other up. Or actually not, because most of the time, they seem to be hugging each other anyway. No, really, I fail to see the fascination. WHY IS HE REVIEWING A BOXING GAME, THEN? Well, I've also had a lot of fun with racing games, and I wouldn't be caught dead near a real racing track. As so often, virtual reality and real reality are two pair of shoes.

Activision's Boxing (one of their first four games ever) is a professional and serious simulation of the sport. Just like in real life, absolutely no strategy is needed. Just punch faster, harder and more accurately than your opponent, and you've won.

The action is seen in a totally flat perspective: from above with absolutely no try to give the player a sense of perspective by adding shades or anything. The fighters seem to consist only of a head, arms and hands. The target area is just the head (funny graphical effect when being hit by the way).

Controls are also as simple as it gets. Joystick directions move your fighter, the button punches. The hand which is nearer to the opponent's nose is selected automatically. Rounds last for two minutes, and the instruction manual seriously tells you to reset the console after that to start the next round - so there isn't even handling of this simple concept.

Even for an Atari 2600 game, Boxing is very simple. The only area it scores concerning technology is the fluid animation. Gameplay-wise, it's quite good, though. Speed is just right, and with the right timing, you can get nice combo hits done. The AI opponent is competent enough, and with two human players, it's a great quick timewaster.