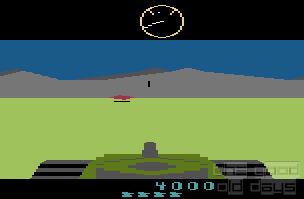 In the not-so-distant future (1999 to be exact), the nations of the world have at last recognized the need for peace to avoid mutual destruction and ensure the survival of the human race. The plan to achieve world piece is strongly reminiscient of the movie The Day the Earth Stood Still: Automated weapons are unleashed, supposedly to exterminate anyone becoming an aggressor. Of course, technology goes awry, and the weapons are starting to exterminate all life on earth. The player jumps into a rusty old tank trying to blow up all the other thanks, fighters and flying saucers which now threaten humanity.

Battlezone is a early three-dimensional shooting game. You can freely move around, turning the full 360 ° if needed, firing the tank's cannon at basically anything that moves. Conveniently (making the game playable), the tank is equipped with a radar showing approaching enemies as little dots so that you know where to turn to. 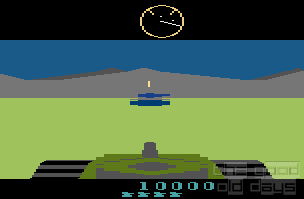 Some enemies will also fire back when they get near enough. Just like the enemies, your own tank will not survive many hits. Being hopelessly outnumbered, quick and accurate shooting is a must to have even a slim change to succeed. Also, you'll need to learn about the different types of enemies, in order not to let yourself be distracted by a harmless, but agile drone while deadly tanks sneak up to you from behind...

The game uses flat bitmap graphics (instead of the vectorized-wireframe graphics of the arcade machine) to create the impression of the three-dimensional perspective. It does so quite well. Although you'll actually only rarely get near enough to see the details of an enemy vehicle, your own tank looks good enough. Especially the movements of the tracks when turning are a nice little details.

Battlezone is truly impressive and unconventional for its time, it's the forefather of almost every single game released these days (How many other genres apart from 3D shooters are there left?), and it's more than adequate gameplay-wise. What more can you ask for?

Battlezone is one of the earliest 3D games that had gotten popular and for a good reason. It was easy to play, had very good vector 3D graphics, and it was very fun. So what do you do with a successful Arcade game like Battlezone? Port it to other systems. In this review, I'll be looking at the Atari 2600 version.

Since the Atari 2600 isn't powerful enough to process polygons of any kind, the game used sprites instead of models. Rather than trying to look like the arcade version with its vector graphics, Battlezone on the 2600 instead went for raster graphics, of course with color and suprisingly, it looks pretty good for a 2600 game. It also seems to place you in a 3rd person view somewhat instead of 1st person as you can see your tank. The scaling is actually pretty good also.

Using the digital controls on the joystick, turning and moving is very responsive and they work very fine. (They did a very good job optimizing the controls for the 2600 port and in fact, I actually kinda find the 2600 version easier to get used to than the Arcade version.)

Just like the arcade version, you shoot down other enemy tanks. It takes one shot to shoot down an enemy tank and you can also die in one hit. To avoid being taken down by tanks you can't see, you have a radar that shows the location of the enemy tank. It can be really fun shooting down those tanks and gaining points in the process. 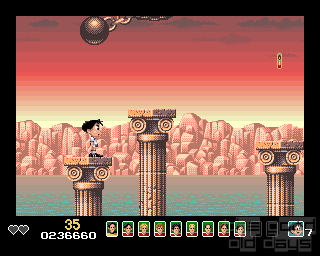