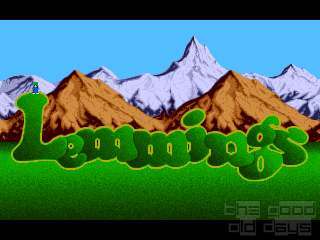 Lemmings - widely regarded as one of the most influential, one of the most original and one of the best games ever. What could I possibly say about it what hasn't been said before? Even today, it is the epitome of the 'puzzle' genre - and I added this genre to this site just for this game. I recoded pages, made special images, defined scripts, all just to be able to present this game. So there has to be something special about it.

The concept is so commonly known that I feel silly to describe it. Still, it is the purpose of this site to take every visitor into account - the freaky expert as well as the total newcomer. So let's get on with it.

Your goal is to aid a tribe of humanoid lemmings to survive the dangers they encounter on their journey. Journey from where to where? Who cares? The lemmings just do fall into each level through some trapdoor, then they do blindly walk into the same direction unless they encounter an obstacle and they just do have to reach the exit. Live with it!

Lemmings aren't exactly the smartest creatures. If they're walking towards a bottomless pit, they'll walk right into it without the slightest hesitation. If they see their buddy in front of them being swallowed by lava, they'll follow him into death. Kind of hard to reach an exit on the other side of a level which mainly consists of traps like these like that. That is where you come in.

You can award special talents to your lemmings. Tell them to climb and they won't turn back on the next obstacle (as they usually do), but climb up its vertical surface. Equip them with a parachute and they'll survive long falls. Tell them to block the way and they'll make all their comrades turn around. Order them to blow themselves up and they will!

These talents / orders are only available a strictly limited number of times. If you've already ordered five lemmings to dig, none of the others will be able to help them anymore. If you've just given out the last bridge-builder kit, all you can do is wait and hope he'll reach the other side of the gap with it.

The talents you can use and their numbers are level-specific, just like a certain percentage of lemmings you have to save. You can never get enough of your little fellows through by giving each of them everything required to reach the other side! So you'll have to think of a way to use the little 'resources' (talents) available to open a way to the others. This is of course always possible with the talents provided, but the difficulty rises over time of course.

The number of levels is endless. They're split into several difficulty levels and within each, the difficulty differs as well. The learning curve is perfectly balanced between an easy introduction to the different jobs the lemmings can do and brain-busting challenges in the later game. That alone can keep you occupied for months!

And then, just when you're about to get enough of it, you discover another mode: the two player game (which I heard wasn't included in conversions to other systems). You grab a friend and try it out. Instead of the panorama screen, you suddenly have a vertically split one and two differently coloured kinds of lemmings come out of the trapdoor! Each player can of course only control his/her own creatures and he/she has to guide them to his/her own exit. The one of saves more lemmings wins the round. Especially interesting since you can of course also 'sabotage' the opponent's efforts in some way by sacrificing some of your own fellows....

Now that I'm running out of things to say (really, I promise), I shouldn't forget to mention the really cute graphics (the sound goes along the same lines) and the extremely smooth animations. Lemmings isn't the dry board game people used to associate with puzzle! It has live-action, it is way less static than those. It became such a huge hit that it spawned many data disks (several “More”, “Christmas”, “Holiday” and “New Year” versions) and also a few official sequels. It inspired many plagiats. Everybody knows this game - and so do you! 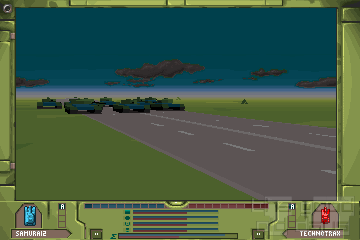