Deathbringer: The Sword of Abaddon
for Amiga (OCS/ECS) 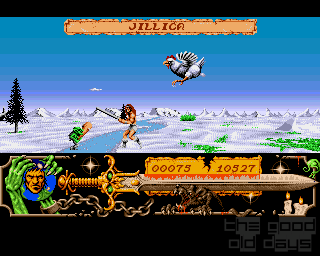 There are only so many ways to make a game belonging to the hack'n'slash genre interesting. Deathbringer actually tries to bring in some welcome innovation.

The player takes control of some muscle-heavy barbarian armed with an oversized sword cutting his way through hordes of ugly monsters (or, basically, everything in his path). So far, so non-innovative. The sword actually has a name, because it has a life of its own (actually, it's a wizard who has transformed himself into a sword, but let's not get further into this...). The catch: The sword demands to be 'fed' with blood. So you have to keep killing, because if the piece of metal remains dry for too long, it'll start feeding on the player's character, draining his own life away. Very good idea.

The second thing which is immediately visible is the absolutely fabulous parallax scrolling. According to the official announcements of the company, there are 36 background levels scrolling individually, and seeing the perfect rendering and almost breathtaking impression of perspective, this is easy to believe. The sprite animation is amazing as well.

In spite of that all, Deathbringer is a horrible game. The controls are so extremely slow compared to the graphics that most of the time, you'll run right through enemies, because the sprite just doesn't stop in time. First of all, this is totally silly, and second, this also proves fatal, because without fights... well... you know what'll happen. Even if you stop and run back towards the enemy, you'll still have to stop again in time, this time coming from the other direction.

Connecting the side-scrolling screens, there are bosses which, once again, look amazing graphically, but gameplay again sucks. Simplistic dodging games which are nevertheless hard as hell? No, thanks. This isn't a game, but a graphics demo. A great graphical demo, but with the worst game mechanics ever.

Mr Creosote:
Originally posted by Wandrell at 10:13 on February 7th, 2008:
Pretty graphics yet the long introduction is all text.
That, in fact, makes the whole product look even more like a graphical demo with the story stuck on as an afterthought.
Wandrell:
The idea of the living sword which demands deaths (a thing also appears on the expansion of Ultima VII) seems to come from the Elric series of books from Moorcock, so the game ends with even less of it's own. It's as you say, pretty graphics and little else (Pretty graphics yet the long introduction is all text).
Mr Creosote:
Feel free to share anything about Deathbringer: The Sword of Abaddon (1991) here!
[Reply] 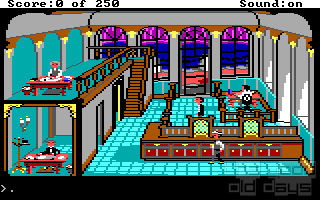