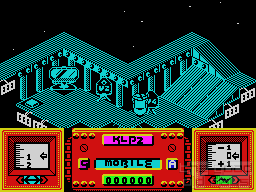 Meta robot KLP-2 from Quazatron is back: This time, the reactors of eight satellites have to be shut down. Of course, these satellites are full of robots to destroy as well.

KLP-2 moves (or rather floats) over the three-dimensional platforms which now have a fixed distinction into screens (circumventing the problem of the rather slow scrolling). Again, it's all looking and moving very smoothly - technically, this is yet another step forward from the already high standard the predecessor set.

Robots can be taken over in 'grappling mode'. The sub-game triggered is a simple 3x3 puzzle in which you have to group identical items. Remember these plastic sliding puzzles you had as a child? This is pretty much the same. A far cry from the simple, yet fun circuit logic found in all the other similar games. Winning such a grapple, the player's robot takes over the superior components of the enemy. These are selected automatically.

In a way Magnetron feels a little tired. The grappling has been made completely uninteresting (not competitive, completely predictable, dead easy), so what remains is a rather limited isometric shooter. And the game is pretty slow for a shooter. Not entirely bad, but also nowhere near as good and fresh anymore. The new aspect of the reactors (carrying rods back and forth) can't save it, either. Sometimes, innovation can kill a good concept.

What's interesting is that this game has been 'backported' to the C64. The original (Paradroid) was made on that system, and Quazatron became the Spectrum 'port'. Such a port spawning its own sequel happens seldomly enough. That sequel coming back to the system where the whole series started (Quazatron remained a Spectrum exclusive) - a unique occurence. If only it hadn't been the low-point of the series. Then again, a low-point in this series would still grace the portfolio of many other companies...