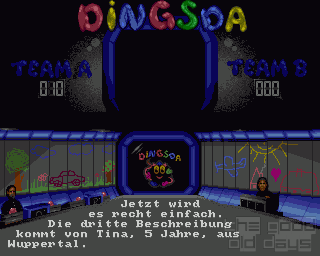 Dingsda was a popular quiz show on German television running from the mid-80s to the end of the last millenium (in fact, it was only popular until the mid-90s, but it ran for another five years after that). The basic premise: two teams of TV 'celebrities' would compete in guessing words which were explained by kindergarten children.

If they didn't succeed after the first (often quite cryptic and seemingly unrelated) explanation, there'd be another one and then a final one, with the explanations going more understandable each time. It mainly got famous for the dubbed 'Oops' (also visibly overlayed on the picture in a speech balloon) whenever one of the children accidentally mentioned the word in question and the 'cute' naive nature of the explanations.

This computer game does exactly the same, with human players taking over the roles of the candidates, of course. And the children being replaced by zombies and a talking dog with bat wings for ears. Seriously - these distorted faces with their extremely unhealthy colour are scaring the hell out of me!

What a way to ruin a game! In spite of limited number of words to guess, it could maybe be fun with a few friends if it weren't for those faces. Sure, it's sometimes ridiculously strict when it comes to what you type in not being exactly the same word (but being listed in any thesaurus as a synonym) in exactly the same spelling as the one in the game database, but still.

Graphics matter. In case you didn't believe it so far, here's solid proof. Someone must have tested this before it was released. I wonder what their comments were. Good enough? No, it isn't! Maybe they had a laugh and told the developers this is great just to have them humiliate themselves publically? Yes, that must be it. 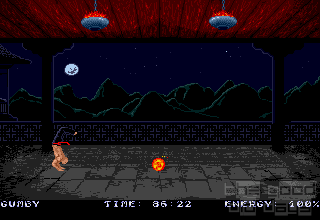