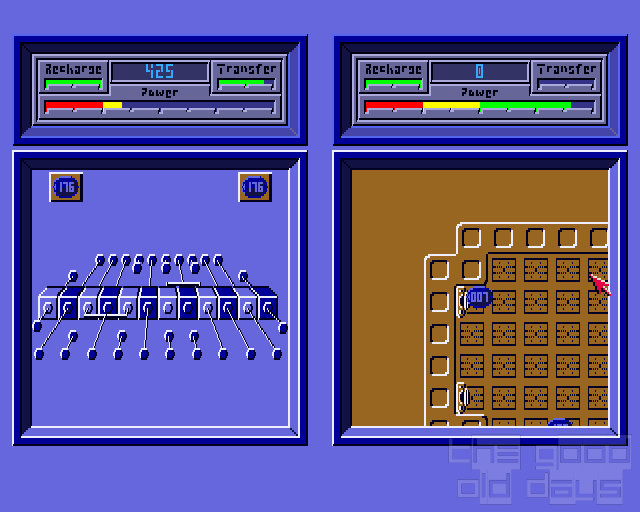 Although the C64 classic had been remade on the Amiga by Graftgold themselves as Paradroid 90, this version had its rough edges. Paradroid II, a freeware remake of the original, came out a few years later. Hard to believe in these days of lawsuits, trademark, patent and 'intellectual property' trolling: The programmer got through with not only using the original name, but also with producing pretty much a carbon copy of the graphics and much of the gameplay.

The rebelling robots on a space station have to be eliminated. This is done by shooting them or 'grappling' with them. The latter is strongly preferable, as a successful takeover enables you to control this stronger former opponent for some time. The grappling itself is pretty much the same as in the original: light up more tiles in your own colour than your opponents using electric impulses. This is presented in a three-dimensional perspective which, sorry to say, is actually a, albeit minor, disadvantage. It makes it hard to see what the opponent is doing.

The high resolution is used very effectively. The main graphics look just like in the original, but they're framed with some bars carrying useful information about power (how strong is your current robot?), charge (fire energy) and transfer energy (enables grappling mode).

Most importantly, though, Paradroid II has a two-player mode, i.e. two humans can go 'hunting' on the space station at the same time. This is a cooperative mode, with both players being on the same station and fighting against the same robots. Although they both can just play pretty much independently of each other, there are some nice tactics which can be applied when really working side-by-side.

This is a very effective and intelligent remake. It retains the virtues of the original and expands them with this excellent multiplayer option. Amazing! Sorry, Graftgold, but this is the 'real' Amiga version of your game. 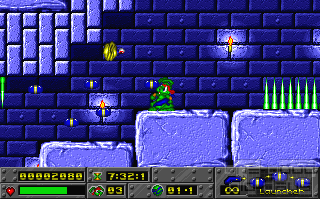