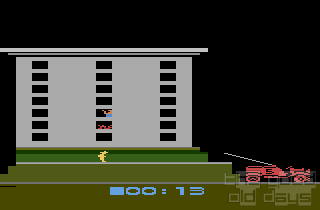 Fire is spreading in a warehouse. Just a warehouse, no big deal, so just one single firefighter is sent to take care of it. Actually, all the other firefighters are drunk at the moment. And the one which does come is most likely drunk as well, but he lost some silly drinking game and thus had to go. Then the shock: There's a man trapped on one of the upper floors, running around in panic! The player has to save him from being roasted alive.

Now, the man isn't completely out of his mind yet, but he's also not very smart. Instead of just going right up to the roof, he'll predictably go to the floor right above the flames. With the fire spreading (slowly or quickly, according to the difficulty level), that means he'll slowly move up. The player can use his hose to 'push' the fire down again, and if a floor is safe again, the man will return to it.

In the end, though, the game can only be won by saving the man using the ladder. Its slope can be controlled from the fire engine, making it possible to reach each floor. Only if the fireman sprite climbs to the same floor where the man currently is, it'll be able to save him. Between adjusting the ladder, expanding it to reach the building and climbing up, the fire might have already chased him up again.

Fire Fighter can certainly be fun for a while, but it's not as action-packed as one might expect. Also, the difficulty level substracts from the fun significantly. Most modes are extremely easy, in spite of limited water supply and decreasing number of floors the man can run to. So, on the whole, the curiosity / weirdness factor is (as so often on the Atari 2600) higher than the motivation coming from actual gameplay. Worth a look for sure. 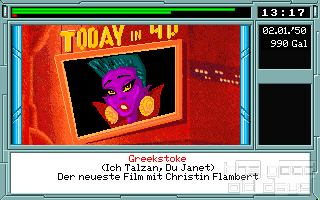