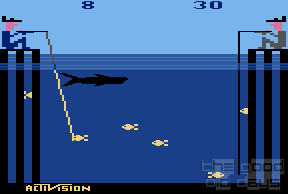 Being better than your opponent. It's one of life's basic struggles, repeating itself over and over again. The fight to be the best, to gain glory and have the loser hang his head in shame and admit bitter defeat.

Fishing Derby is a classic example of this struggle. You and your opponent (another human player or computer-controlled) are sitting face-to-face on a lake. Each is armed with a fishing rod, and the goal is to catch more fish than the other one.

Catching fish isn't really hard, in fact. You're watching the action from the side, including a 'cut' through the lake itself, so you can see where the fish are. Not only that, but the lake is swarming with them. All you have to do is get your hook near the mouth of one, and it'll bite. Reel it up quickly, and your score goes up by its weight.

There are a few things to keep in mind. The real big ones (i.e. those which give most points) are swimming deep. On the other hand, the small ones right below the surface can be reeled in at a more rapid rate. And then, there's the shark. It swims around, waiting for easy prey. Fish which are reeled in too slowly are just that, so it might just snatch your loot away.

Fishing Derby is notable not only for trying to convert a 'sport' into a computer game which is utterly unsuited for it (fishing is a 'game' of patience, not of action), but also for being one of Activision's first four games ever. Nowadays, they're one of the largest publishers of video games in the whole world. Back then, they had to hire a former Atari game designer to get anything done at all. Puts things into perspective somehow, showing that everybody started out small once. The result of this experiment, putting the high factor of bizarreness aside, isn't too much fun, but only somewhat alright.

Mr Creosote:
Quote:
How can we submit ratings for games?
Just log in to the site's administration frontend (see your private messages). You're welcome to add ratings to any game on the site - unfortunately, this happens too rarely.
Cypherswipe:

Fishing derby was one of my all-time fav 2600 games, I dubbed the shark "black bart". You might want to add that you can adjust the reel-in speed by pressing the button to go faster or holding the joystick "down" to go slower, and that your opponent can't begin reeling his in if you already have one on the line (and vice versa). This adds a strategy element to the game in that you can try to force him to feed the shark by timing it just right.

How can we submit ratings for games? I'd like to give fishing derby a 4 or 5 out of 6. 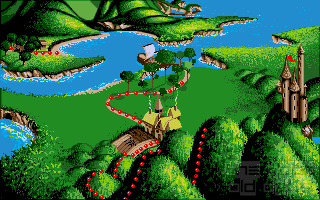