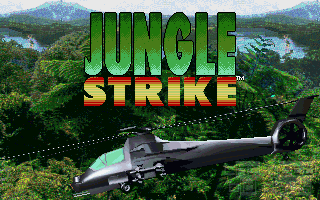 Again the free world needs you and your american technology. The Arabic madman's son joined forces with a South American druglord and you are sent to the jungle where his plans must be reduced to smoking ruins with your helpful Comanche, and a bunch of new vehicles.

After the first levels you notice this drug lord must have monopoly of drug market, he owns an impressive army that even includes a small fleet of nuclear submarines. Luckily as any bad guy he is moronic, as you see on the level ending cutscene when he cries "I thought my submarines would destroy that helicopter".

Anyway what matters here is that his army is pretty big, and is all yours to be blown away. But as in the first game you don't go there and get trigger happy, there is a bit of tactics, with the resources (ammunition and fuel) being of a limited number and each mission divided in eight or so submissions.

Arrive, secure the zone, capture this guy, destroy this place, leave somebody on that building and come back, that kind of thing that worked so well on the first game, along with the danger zones where anti-air guns are beefed up until you complete an objective, is what you can expect of a level.

Now, there is something new that at first sounds fun and interesting, new vehicles: A hovercraft, a motorcycle and a stealth bomber.

The first is used to avoid flak cannons and you can try it soon, its main point is being easy to manoeuvre, even thought it tends to hit fuel drums. The motorcycle is used for a shot time, and is the same as the hovercraft but for land (supposedly it's a police vehicle, even thought it is equipped with missiles and mines), can't turn quickly nor move backwards. And the stealth bomber can raise and lower, but hitting something with its bombs can be painfully hard.

I suppose they thought it would refresh the game, but it's more of a gimmick as you can use them in just one mission each, and the motorcycle not even for all of it. At the end what you get is the same Comanche of the first part, capable of surviving to nearly all and very agile, but not precisely a novelty.

Moebius (2014-07-21):
Yes, it was a great game, and i regret i didn't have it in my younger age... i got to it much later, in like 2000.. so i naturally wasn't too much into it.
Mr Creosote (2008-02-18):
Quite old-fashioned for 1995, which makes it all the more interesting.
Wandrell (2008-02-18):
Quote:
Again the free world needs you and your american technology. The Arabic madman's son joined forces with a South American druglord and you are sent to the jungle where his plans must be reduced to smoking ruins with your helpful Comanche, and a bunch of new vehicles.