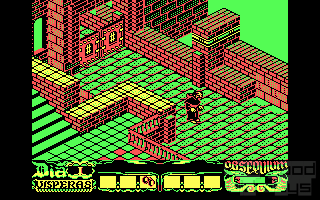 A man was murdered on the abbey, and it is fray Francisco, a monk who has just arrived, the one in charge of discovering the culprit. And he must hurry, because in a few days inquisitor Bernardo Gui will arrive, and it will be better for everybody if he doesn't get mixed in all of this.

An abbey with murders, a labyrinthical library, inquisitors and a forbidden book; if you didn't know this game is and adaptation of 'The name of the rose', whose original name was going to be 'The abbey of crime', the same one the programmers had to choose when they didn't get the support of Umberto Eco for the game.

It may not have all the stories and the history that mixes in the book, it is centred in the crimes and the library, but still it's a nice adaptation and, according to some, the best Spanish videogame, created during the 'golden age of Spanish software'. Yet it suffers from some big problems.

First the abbot, you will learn to hate him very quickly, once he orders you for the tenth time 'follow me' because you didn't walk a perfect copy of the path he uses. And if you aren't kicked out of the abbey, as each time he is angered the obsequium bar shrinks and when there is nothing left you are out, you will have to suffer finding you are not following the abbey rules when you can't discover where should you be during the mass or which dish is yours.

Then the perspective, the maps are well done, each being noticeable different and with a nice isometric perspective, but when you move from a room to another the sudden change of camera helps to make you walk on circles around the abbey in search of the place where you want to be, as nobody gives you directions (except for mass and eating, as Adzo will guide you there) and there is no map.

Also the time, each day is divided in four sections plus night, when you are expected to be sleeping, and each one is too short. As you can expect, in each section there is something to do, and let's hope you know beforehand where it is as there is no way of saving your game.

So at the end, for supposedly being the best game of my country it is pretty flawed. Not that the game is awful and worthless, it surely marked the industry at its moment, the engine is pretty good and I liked it as a child, but it's not as good as people say. Or maybe it just didn't age well.