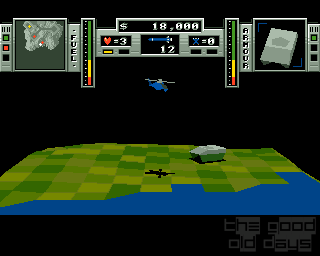 Do the changes warrant a release as a standalone sequel, or is it just a data disk with new levels? One of the eternal questions of the gaming industry. Almost always answered to the customer's disadvantage. The question is also very valid for Zeewolf 2 (not going to repeat the nonsensical subtitle).

This sequel looks like its predecessor, plays like its predecessor and thus shares its qualities: The fast-paced hit-and-run style missions, the easy controls, the intelligent semi-automatic targetting system, the always-accessable target briefing and good (or at least interesting) graphics.

The changes all fall into the realm of corrections and improvements to existing virtues. For example, you'll now get a password after each of the 32 missions (instead of after every fourth one) which is, of course, welcome. The missions themselves have also become more varied and balanced (and the landscapes are more colourful). In some, you can even land your helicopter and take control of a tank, a boat, a plane or another type of helicopter.

What's most important is the improvement of the graphical engine. It's apparantely been optimized for greater speed. Now, there are two kinds of speed, of course. You can optimize for low-end or high-end systems. Although the game still runs on an A500, the real fun only starts on an A1200, ideally with some Fast RAM.

On such systems, the flying has become even faster, making it 'feel' very differently. The helicopter's inertia is lower, it's turning and moving quicker. This makes diving down on the targets and blasting them and twisting to avoid being hit even more fun!

So, while none of this is revolutionary compared to the first part, pretty much every minor complaint of it has been addressed and improved. That's one valid way to get closer to the ultimate game, too - and today, it doesn't matter much whether it was released as a standalone game, after all.