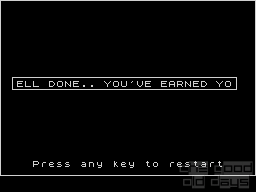 It's the things which are fun in real life which usually translate well into great computer games. And you know what's really fun? Lawnmowing. Don't you just love going back and forth, tweaking your route till perfection, while at the same time, you have plenty of time to think about all kinds of things? At last, Advanced Lawnmower Simulation gives you the opportunity to do all this in front of your computer!

The lush title screen lets you select one out of six mowers. There's, of course, a lot of strategy involved in this decision. The heavy-hitters with a strong motor virtually mow by themselves, but in the constraints of a small lawn, they can't play their advantages as much as a small and agile mower. Also, you have to be careful not to spend more than you'll get as payment.

Then, the real fun starts. The controls are absolutely amazing! The 'm' key engages and disengages the mower's motor. It's really as simple as that! Now, you have to be careful to cut the grass decently, of course. The most important aspect is symmetry. If you do well, you'll be well paid, if not, you have to try again. After that, the next lawn is already waiting for you, so in time, you can gradually build up a true lawnmowing empire.

It immediately becomes apparant how much time and brainpower went into Gardensoft's Advanced Lawnmower Simulation. The pure realism of it is just astonishing beyond belief! And best of all: This seminal game started a whole new genre. It was blessed with at least three direct sequels, spawned various imitations, has been ported to virtually any system and it has even been remade so many times it's impossible to keep track of. In spite of the game's obvious qualities, Gardensoft went out of business before they could release their other announced titles, like the Spring Cleaning Simulator or a Washing Up Simulator. Life's unfair.

RGB:
I remember first reading about this in YS and thinking it was the most hilarious thing I'd ever seen! The Spectrum was already beginning to look a bit out-dated compared to the likes of Atari and Amiga but thankfully this title came along to prove that when it comes down to it, the Speccy still had some awesome processing power
Cypherswipe:
Kinda reminds me of a crappy little type-in program back on my color computer 3. It was called lawnmower or grass cutter or something similarly obvious, and green lines tried to reach the top of the screen while you moved a red line back & forth with the join stick to "mow" them.
Mr Creosote:
Feel free to share anything about Advanced Lawnmower Simulation (1988) here!
[Reply] 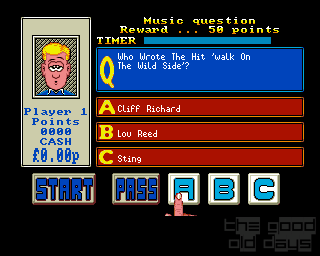