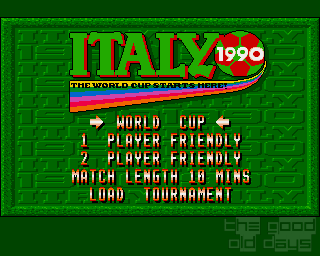 Just like movie tie-ins, 'official' games of major sport events are crap in most cases. After paying for the expensive licence, little money seems to be left to make a decent game. Or, maybe the companies think it won't be important anyway, because fans will buy the game just because of the name.

So, if you're looking for a good football game, you can stop reading now. Italy 1990 can boast with the official player names (which, admittedly, is a big plus), and quite an extensive database of player abilities (of which at least speed makes quite a difference). It also has good graphics. Everything leaves a very polished impression, from the TV announcer appearing between the games to the 'cuts' showing special events like a corner. The players look quite good as well.

What makes the game bad and what makes the reviewer wonder whether there has been any beta testing at all is the fact that the game is so bloody easy! At first, it plays quite well, but there are a few schematic ways which always result in a goal. The goalkeepers are so bad, they always fall for the same few 'tricks' (which aren't tricky at all, but just regular shots, like the full-power shot from the border of the penalty area or the deadly 45° shot). And the opponent's players, who at least try to snatch the ball (which is glued to your player's feet) from you, can easily be avoided even if their stats are way better than yours. So, after a few matches, winning the world cup with Egypt (the team with the worst stats in this game) is no challenge anymore.

Even playing against another human won't really solve the problem, because the goalkeepers are always AD (short for 'Artificial Dumbness') controlled. So it all boils down to a ping-pong contest with the players alternatingly scoring, and the winner being the one who is in the lead by chance when the match ends.

So, on the whole, Italy 1990 might not be a 'what were they thinking' sort of game in the classic, obvious way, but it's still unbelievable how something like this went through quality control.

Sources on this differ, and it all hints at a complicated and very, very chaotic situation.

According to The One and Wikipedia, it's an officially licenced product. However, the Wikipedia article already hints (involuntarily) at the problems with this statement indirectly, by pointing to Virgin's World Cup Soccer: Italia '90 instead of this game by U.S. Gold on the article of the latter company.

Zzap! explains this confusion with the following explanation: Virgin's game is the 'official' one, but U.S. Gold were allowed to make one due to the wording of their licence for the 1986 World Cup.

Sounds believable. In any case, this game is the only one which has the correct teams and player names of this tournament. Neither Virgin's version nor the other Italy 1990 (by Codemasters) can boast with that. Which is quite embarassing, if Virgin really had the licence...

Tuss:
Are you sure this is an officially licensed game? You'd think they'd use the same logos then...
[Reply] 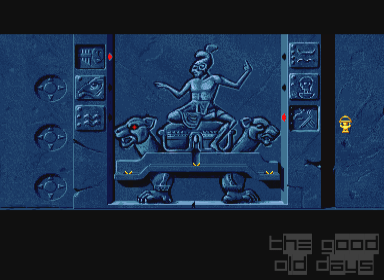