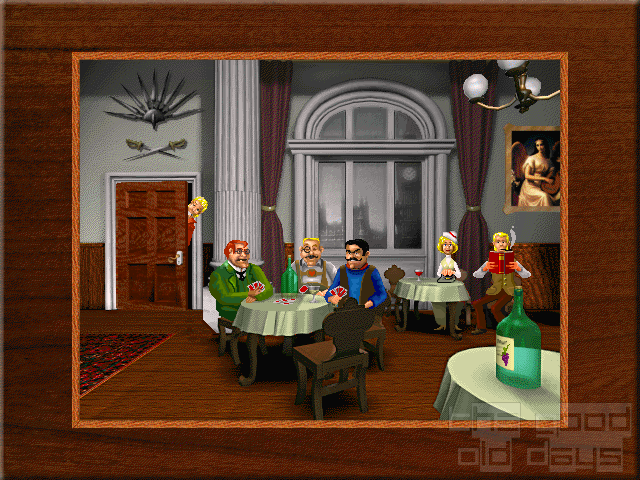 Whenever something claims to be 'crazy' (meaning 'funny' or 'wacky') in the title, you should be careful. It usually means the product won't be crazy at all, but rather lame. Simple reason: They try too hard, it all gets too obvious. Die total verrückte Rallye (literal translation: the totally crazy rallye) fortunately only stumbles into this trap partly, keeping the lameness factor at a bearable minimum (if only there weren't this 'announcer' with his GDR / Berlin accent...).

The game concerns a group of people travelling across Europe in the rallye and getting rich in the process. A capital is chosen randomly, and whoever arrives there first (by whatever means necessary) receives the prize money. Then, another capital is chosen and so on. The overall goal is to earn more money than all the others.

Just like in a board game, the players move around by throwing a dice and then moving across the predefined routes on the map. Depending on what kind of tile they stop at the end of each turn, something good (blue = get money, yellow = get event card which can be used to your advantage) or bad (red = lose money) happens. White tiles are cities. In those, money can be invested into the local industry which then contributes a certain sum to one's bank account each turn.

The economic aspect is extremely simple: Just buy as much as you can. This makes Die total verrückte Rallye a very carefree game. The fun is basically in the travelling which is presented in a very attractive way. The players are moving over a good-looking map (which incorporates some well-known sights and other cartoony landmarks) without even worrying about the mode of transport (the default car is switched for a plane automatically once somebody leaves dry land). Best of all: The shortest route to the current target capital is indicated with an arrow. Very good usage of a computer's abilities compared to a real board game! However, there are often good reasons not to follow this proposed route (e.g. to avoid landing on a red tile), so it doesn't detract from the free choice of the player at all. Another really nice aspect is that the very tight borders to eastern Europe are opened after a few game years (indicating the fall of the iron curtain), opening up previously unaccessable territory. 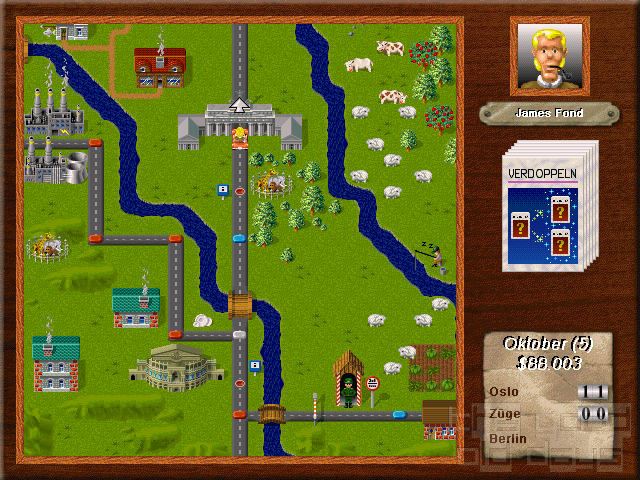 A few well-made features are there to spice things up a bit. First of all, there's Dr. Drago (who even got the honour to be the title figure in the English version). He's basically an annoyance who attaches himself to the player who did worst in the previous round (i.e. the one who didn't even get near the capital), following him around and doing stupid things which cost that particular player money. Dr. Drago is basically there to increase the incentive to go for the target capital even though it seems hopeless to reach it first - and it's working very well. Then, there are the cards. There are many different ones which can become helpful in different situations. Getting more dices to throw for one turn is useful for a player who is still far away from the target city, while the 'one space' card is great if you're standing right next to it. The cards can also be used to sabotage your opponents, buy more industry and so on.

Last, but not least, there are random events. These are basically forces of nature doing their job in a destructive and disruptive manner. Falling rocks might block a road for some time, a flood might destroy parts of a city - including industry. These events are the only aspect where the designers went a little too far, because especially in the early stages of the game, losing all your sources of income because of one single random disaster just happens too often - and that's pretty much fatal for the player, as early industry obviously amounts to huge sums of income in the course of the game.

There isn't much else to complain about in this game (the main beef is indeed the annoying accent of this one guy mentioned in the introduction, but since you're reading the English review, chances are you won't ever get to listen to it anyway). Of course, the typical board game curse strikes, i.e. it gets better the more human participants are gathered, and at the same time, waiting times become quite long with many players (no matter whether they're human or not). However, as far as pseudo-board-games-on-the-computer go, this is pretty much as good as it can get. A welcome change from the overly serious and complicated average strategy game! 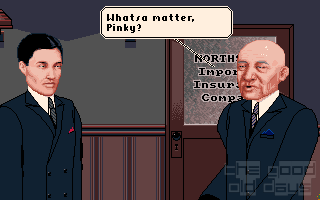