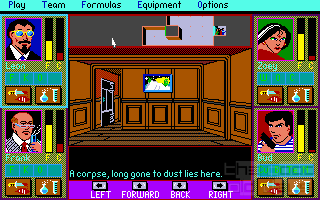 An old mansion, a lost grandfather and plenty of monsters in what at firsts looks like another dungeon crawler, but that hide within a few things which make it different. But don't get your hopes high.

If you have played this kind of games before you know how this one works: the group starts at the door of the dungeon, and it should end in the deepest floor, where the evil guy is waiting for you to kill him.

Only this one looks more like a parody of that kind of games. The horror movie theme only serves to mark its light atmosphere, your characters are not the fearless dungeon adventurers.

You have the typical roles of mage, warrior and something in between hidden in the four classes of the game: the medium, the scientist, the technician and the fighter, these four make your party without being allowed to repeat any. As usual from one to another weapons and statistics is what changes.

As I said it looks like a parody, and it is remarked with a bunch of fearless adventurers who lack the fearless part. Here you don't have health, instead the fear meter increases and enemies scare you until you are unable to do anything.

If all the party members are mad with fear they don't die, the four of them run away to end in a random place of the level, sometimes losing an object but normally just recovering somewhat from the fear.

Anybody would end lost easily in this place without the automap by the way. The place is pretty empty, you may see a few pictures on the walls, find things that apparently where lying on the ground, or read a mysterious message a few times but all the building is just a bunch of identical window-less corridors and empty rooms.

Going back to the game system, the magic is similar to the "health" (as after all that is what the fear meter is) in one thing, both recover over time, just walk around, or better wait on a place so you avoid most of the random attacks, and in a few minutes everybody will be like new.

I said magic, but really they use chemical formulas, which can be learned from chemistry books, or if you already played and know a few, you may input them directly in the formulas menu.

The regeneration is what shines here, making more enjoyable what otherwise would be an average game. Yet the health regeneration shines more for being ignored by other games of the time, but being showcased nowadays as a big new step of the game industry.