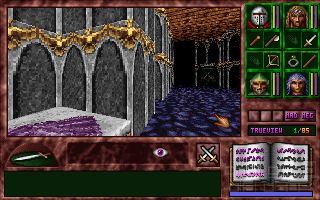 An evil wizard has sealed away the gods of the kingdom. Why? Who cares, you are here to kill him as otherwise a horrible thing will happen or something. And by the way don't forget to kill anything that moves.

The plot isn't what is said deep. Really it's just an excuse to go from dungeon to dungeon in search of a handful of crystal to open the gate that will move you to the bad guy.

And the game can't also be called great. There is a bunch of good things on the game, the engine looks polished (except for that stupid bug where you drop keys through doors), the graphics are pretty and it is more or less easy to play, as long as you don't want to use many spells which would mean moving pages on the spell book a lot.

Thankfully the combat is automatic so you get a bit of time to change things on the middle of it. Just press the button and they start beating that guy who just happened to be in front of you but is obviously evil.

The game is mostly an action game, they try to sell it as an RPG, and there are a few RPG things, but don't get hopes high on that part (well, like it happens nowadays). How can you affect the game? You can choose four characters from four sets at the beginning, and they are fighters, mages, fighter-mages and mage-fighters. With prettier names of course, but still they are here to beat, to cast spells or at much to use range weapons.

And of course don't think about affecting the plot or the development of the game, unless you consider the shops that for some reason are in several levels a way to impact the game and change your characters. You can't even choose to which dungeon go next. Well, maybe you can later but I won't play it for so long.

There are some nice details, nothing is perfectly bad. Things like having to find food to eat, or the automap which always is helpful, and the nice graphics I said before. But the game lacks, it's pretty outside and pretty empty inside. 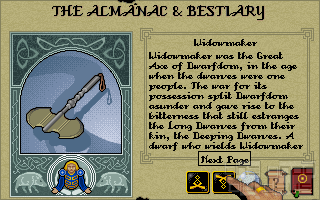