Heimdall 2: Into the Hall of Worlds
for PC (DOS) 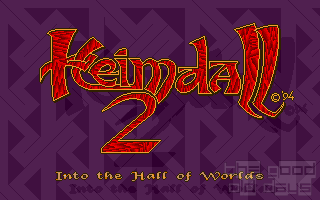 Again Loki is preparing to start the ragnarok, just this time he got the help of some strange monsters which seem to come from nowhere. Your job is finding the way through Yggdrasil, to recover the pieces of an amulet from another world which is the only thing powerful enough to stop him.

In the first one you could create a party for exploring the islands, this time you just have Heimdall, a valkyrie and nearly nothing to explore. The game is pretty linear and simple, yet if I didn't know already what to do (thanks to having played to it more than once as a child) I would get lost plenty of times.

Sometimes you don't even get the slightest clue, and leaves you wondering if you didn't pay attention to something important. How will you know for example that the way to getting to the half world is throwing an object to the fire? Well, you probably would just get desperate and try it as there seems to be nothing else to do. It seems the game expects you to know already what goes next.

I said there are two characters you can use, but the thing didn't receive much thought, the only use I found to it was accidentally losing Heimdall near the end of the game and being unable to advance, as the valkirie was too weak for casting the resurrect spell (and even more for fighting) and I needed both characters alive. Ok, it's also useful for getting a bigger inventory, but there are plenty of other ways to do that.

Fighting is another weak point, really they mean little even thought there are quite a few. Usually the enemy courteously attacks one by one and you get rid of them pressing continuously the attack button. You have a shield for blocking in case your reflexes are good enough, and the magic system for helping yourself, but it's more useful when used just for healing.

This magic system is based on runes. You probably know how it goes: it consists on mixing symbols which always looks nice, lets you try to guess spells and can have some hidden ones. Sadly it ends being the better done part of the game.