The Island of Dr. Brain
for PC (DOS) 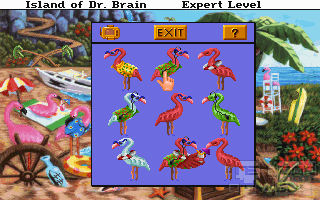 Now that you became Dr. Brain's assistant you've got your first job assigned to you: going to Dr. Brain's private island for recovering a battery necessary in an important new creation.

At first glance you could say this is just more of the same, after all it's the second part of a game which really is just a compilation of puzzles. But there are several improvements over the original.

The first thing is that moving from one place to another is much more fluid, the obligatory 3D maze disappears (and really, it wasn't too hard or so interesting that you needed to play it so many times), once you finish with a section of the island what you do is simply moving to the next one.

Also the scenarios where improved. Now you won't go from corridor to corridor opening doors, the places you visit have variety and plenty of things around which you can touch. Not all of these objects are puzzles, so it can get a bit distracting, more as sometimes you must interact with the place to activate the next puzzle.

To the mix was added a bit of competition, not on any interesting way just sometimes the number of moves you did is compared to the minimum possible, and in some cases the time you take to reach the solution is timed and the shortest becomes a record. Not a thing I like as I play for the fun, not for measuring myself.

Anyway the puzzles, the meat of the game, keep the variety they had on the first game and so most of them are interesting, even if a bunch are too easy. Like the one of separating microscopic animals with two functions, that one looks mathematical but really is solved in a moment looking at how the lines move when changing numbers.

Really more than a bunch of them are too easy, you won't have a reason for using the hints even in hard mode, which really can make the situation worse as to make some puzzles harder they just added so many pieces that it becomes monotonous.

So, what can I say on the end? It's a nice game, easier than the first one but that improved it in some aspects, yet there is something that is not right here and probably is the typical problem of the second parts. The first is good and a novelty, the second feels like they just tried to copy the first one instead of doing something new.

Wandrell:
Feel free to share anything about The Island of Dr Brain (1992) here!
[Reply] 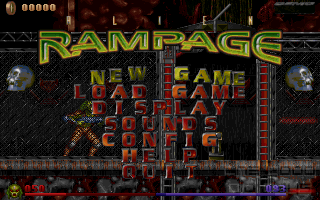