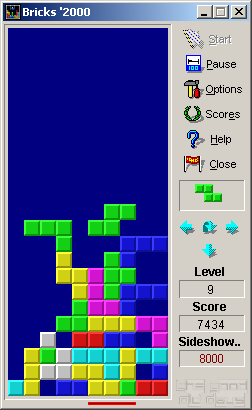 I had to notice that The Good Old Days do not feature a single Tetris-game. So I went and asked Mr Creosote if there was any reason for it, suspecting he might have some sort of hidden hatred for that game or something like that. But well no, no real reason - just doesn't seem to be his genre. It's mine though. Those very very few of you who remember my own old site The Keep might also remember I had a good number of Tetris-clones up there. So I thought which of those might be the best to be THE Tetris-game up here. I'm not saying there won't be any of the other ones around here anytime, but one has to be the first.

It was a close call, as the original Tetris is - well... the original after all. But I decided for this version simply because it is the one I have played most over the last few years. It's one that sneaked its way back on my harddisk everytime I had to reinstall my operating system - well, not that that would happen so often, but anyway.

Let me say something about the Tetris-concept first. I seriously doubt there are many who haven't heard of it, but I'll explain it anyway: There are seven ways to put four squares together - not counting the variations you can also get by rotating the seven basic tiles. Now in Tetris you randomly get one of these pieces falling down - you can rotate it while it falls, but once it hits the ground it stays there - although in the beginning you still have a chance to push it for a few milliseconds before the next tile begins to fall. If you manage to put the pieces together to a whole row it will vanish. Letting more than one row vanish at the same time means bonus points. If you do not manage to let the rows vanish and the pieces hit the top you lose. Your goal is to prevent that as long as possible. The more points you get the higher the level you are in - and the faster the tiles fall. Now that's a pretty simple concept and it has been copied a zillion times.

I did choose this version for a few reasons. One is that this one just concentrates on the basic idea and doesn't add any distracting variations or oh-so-great-graphics that are simply not necessary into it. It's just it - the plain and simple Tetris. Another one is that there's no emulator necessary or anything. It runs under Windows and there's no problem with it at all - well... as long as you use Windows. That I have to admit. I have no idea what it does if you try to run it on another platform.

Now I do have one bad thing to say about it. There always have been two possibilities in Tetris-games for the event of pressing the down-key. One is that the tile immediately beams on the ground, the other is that the speed at which it falls just increases. I prefer the second version, this one does the first though. It's not a mistake as such, I just don't like it so much. One thing that makes up for it is the red bar at the bottom that indicates where the tile will land though. That one helps a lot - my most common mistake always has been to miss the spot I wanted the tile to land when I sped it up.

The rating has been a close call. This game is a standard. If you ever touched more than two or three computergames one of them should have been Tetris. This game is a very very solid incarnation of it. What is missing for any higher rating than 4/6 is the lack of flair. This one has everything you need for Tetris, but it doesn't have any extras - and... it's a clone. So it would simply not seem right for me to rate this game any higher than 4/6.

Mr Creosote:
Quote:
I had to notice that The Good Old Days do not feature a single Tetris-game.
All lies! Tetris has been present on the site for years already

I also have to protest against my characterization as a Tetris hater / uninterested person in that review. I enjoy a good round of xtris every few days. Mostly versus bots these days, of course, as people don't seem to be willing to take the time for it anymore. 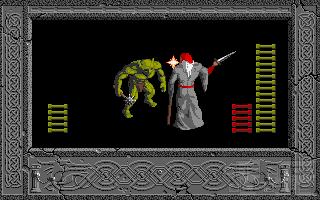