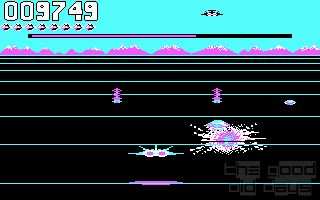 Buck Rogers... when I hear that name I instantly think of this stupid, annoying, just plainly dumb robot-thing... Twiki... Argh! I guess it was supposed to be cute, but well - it's not relevant here anyway. The whole series... comic... movies - everything ist just not important here. The only thing this game has got to do with Buck Rogers at all is just that there is some kind of spacecraft involved and there's a bit of flying around in space. That's just about it.

So after being disillusioned about this you can as well just look at it as things were back in mid '80s. We're speaking of the time of those big arcade-machines. They just put together a simple actiongame and thought of some kind of movie, series, comic - whatever - just something that sounds a bit fancy and might attract some kids. So they did here.

The game follows the basic arcade-mechanisms. There's no big thinking, you just try to stay alive for as long as possible while raising your score. Doing this you fly some sort of slalom parcours through... well... I will just pretend to go along and call those sticks - um... energy... err... field... generators? I really don't know. At least they come in pairs and it works well to just fly through them although I didn't notice any negative effects if you don't - you just have to complete a certain number of successfull “fly-throughs” to pass the level. The only thing I advise you to prevent is trying to just fly against one of them - that will just cause you to go boom and cost you one of your spaceships and eventually will end the game.

While at first you just have to master not to hit the... err... generators? after a while roughly diamondshaped UFOs will appear which make fine targets for your lasercannon - you don't have to shoot them at this time if you're a peacefulminded person - just try to prevent flying against them as that again will make you go boom and that - you guessed it - costs you another spaceship. After a while some squidlike creature will also appear on stage which I'd advise you to treat like the UFOs, but seriously I don't know what they're for - they don't seem to be motivated so very highly and disappear rather quickly.

After having mastered a bit of slalom you'll get to fly in space - which is sort of a good thing as the game won't want you to fly through or around the - things... you know - now you just have to shoot the UFOs - so that means goodbye to the pacifists among us.

The end of my personal career as Buck Rogers (oh yes, I really really identified with him...) was when I ran out of fuel and something big appeared on screen. My thought was that that might be some sort of intergalactical gas-station. The intergalactical gas-station's thought obviously was “oh nice, that looks like some spacecraft I can let go boom!” - and so it did. I am still convinced it WAS a gas-station as waaaay back when I owned a C64 I also had this game and I am pretty sure this was how you got fuel.

Anyway - my technical advise for this is to run it under DOSBox, but still use MoSlo (which is included in this download) and to play it with a joystick. It's not bad really, it's just ugly because of the CGA, even though I would say that they got a lot out of those 4 colors. But then again it's still just 4 colors - and even a pretty ogre is pretty ugly you know. 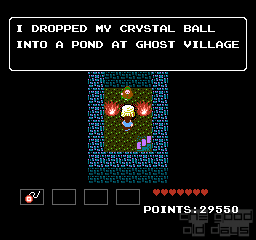