The Perfect General
for Amiga (OCS/ECS) 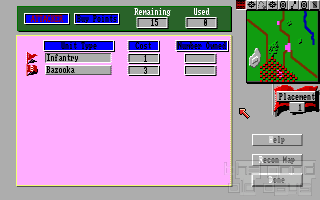 The early 90s made the previously hardcore genre of hex-based wargames accessable to a much broader audience. The rules got simpler, the controls easier and the graphics less cryptic. The prime example of this trend is of course Battle Isle by Blue Byte. To a lesser extent, The Perfect General contributed there, too.

This 'lesser extent' is even an advantage to many people. Instead of total simplification for beginners, it offers something for everyone: accessibility and at the same time complexity. The game is incredibly easy to learn, especially because of the mouse control. You can do everything with one click: moving, attacking or waiting. No menu needed. Don't laugh, you couldn't take that for granted back then! 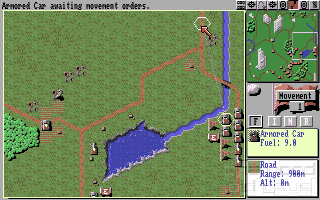 The rules is where the game really shines though. They're perfectly balanced, complex and easily understandable! And fair. A normal scenario goes like this: one player takes control of the 'attackers' and the other (either another human - even over Modem or Nullmodem - or the Amiga) plays the 'defenders'. They both buy units which they deem appropriate for the task from limited resources and place them somewhere in their own zone on the map.

Each turn is then split into different 'phases': setting targets for mobile artillery, artillery firing, setting targets for stationary artillery (for next round), direct fire, movement and second direct fire. Every phase is done by both sides before moving on to the next. To make it even a bit more complex, there are special actions like 'opportunity fire' in the movement phase, the option to run over infantry with tanks and some more.

After each turn, 'victory points' are awarded to both sides for the control over cities. That means the defender will get many points at the beginning of a scenario, the attacker has to hurry to drive him away. At the same time, military victory isn't everything: even if the defender has been beaten completely at the end, he can still be the winner, if the attacker wasn't quick enough. Every scenario is played twice, every player has command over each side once. That ensures completely equal chances for both players, because only after such a 'double round', the total points are compared. 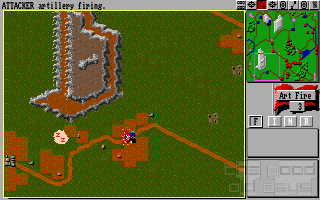 Another speciality has been mentioned indirectly before: the available units. There aren't many different ones, just three types of infantry, three types of tanks, three types of artillery, a transporter and a mine. This restriction is actually really good! It puts the focus on the actual tactics instead of killer units. And the most important part: the units are actually very different! They not only have different abilities like speed, range and power like in any of these games, but at least the artillery is treated completely differently from all the other units. It has its own phases, it's highly destructive (not only one hex, but seven!) and it takes time to fire it. Mobile artillery has to choose its targets all at once and all cannons are only fired in the next phase. Stationary artillery even takes a whole turn to aim! If the enemy has left by then, all it destroys is some trees then...

The Perfect General has the best set of rules I've ever seen in this genre! You're walking on a very abstract level on which the basically bloody and cruel topic of war is reduced to chess-like tactics - only a lot more sophisticated. As far as I know, it is the very first game to offer 'scripted' scenarios, i.e. scenarios which include certain events in the middle of the game (like for example the arrival of reinforcements) - a concept which got extremely popular from the second generation of 'real time strategy' on. It is also presented in really nice high-res graphics (the screenshots' size had to be shrunk down, that is why they may not look exactly like the original display) which make everything easily recognizable. All one could ask for is more scenarios - and, oh wonder: several data disks appeared over time

Mr Creosote:
Feel free to share anything about The Perfect General (1991) here!
[Reply] 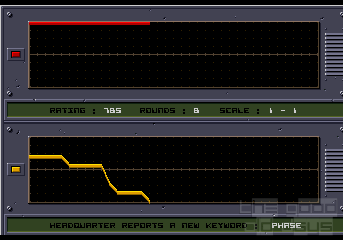