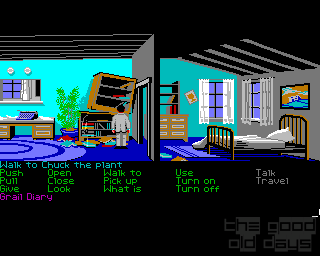 Indiana Jones and the Last Crusade - the last of the movies (well, at least they said it then), and the first Indiana Jones movie to become an Adventure game (the second time Lucasfilm used its software branch to make an Adventure game of any movie). Huge expectations, because in an Adventure, storytelling has to be a little better than in a simple action game throwing a few snakes at a whip-wielding hero sprite.

They really tried their best making the game as cinematic as possible. From the great credit sequence (showing the train chase sequence the movie starts with) to numerous lines of dialogue directly taken from the original script, this is a very good conversion story-wise. All the important characters are there, they all look right (as far as 20x50 pixels can do that, of course) and the locations are visited just like in the movie, too.

Even a few puzzles were incorporated directly, so being equipped with relatively fresh memories of Harrison Ford's hunt for the Grail (and his father) certainly helps. That's not everything there is to solve, of course. In such brain-overloading situations, Henry Jones' Grail Diary in its two incarnations (a printed one containing all the regular information plus an in-game one which contains slightly randomized clues) often comes to rescue, and otherwise, common sense and logical thinking is required.

In spite of all the fun I had with this game, there are two major obstacles barring it from an even higher rating. First of all, there are three stupid mazes. One of them can be avoided by solving an alternate puzzle at least, but that's still two too many. To make matters worse, there are action scenes in this game. Sure, Indiana Jones needs action, and it's not even all that badly incorporated. The problem is the fist fighting specifically, because it's all too easy to die there (and that damn energy bar just doesn't replenish itself after winning such a brawl).

In addition, there are a few nitpicks. I've already mentioned there are alternate paths / solutions sometimes (which is good). However, sometimes one of them can only be triggered by having done something completely different at a completely different place way earlier. Players without the gift of precognition will have a hard time taking the easier routes. The same thing applies to a few (really few) other puzzles which require you to have written something down way earlier - something which wasn't really obviously important (sorry to be so vague, but you know... spoilers).

None of that really spoils the game completely. To this day, I take it out from time to time to play it again, and each time, it's a very rewarding experience. Little did anyone know then, of course, that the big Adventure revolution was still to come - but that's another review.

Attachment: WIN_20200515_14_27_51_Pro-1589578154.jpg
Mr Creosote:
About the Venice library: The pixel hunting is bad enough in itself, but the worst thing in my opinion is that you don't even know you're looking for something (let alone what) in that situation. For a first-time player, there is no incentive to search the shelves at all, especially since the puzzle to find the catacombs is rather easy and thus quickly solved without much need for aimless wandering.
Vemperor:
Great Game, but you're right: I hated the same things. The fights were just annoying and it really bored me to search the bookshelf in Venice for half an hour jost to find all the hidden single books... Labyrinths ain't fun too, so it's just an average Lucasarts title...
Mr Creosote:
Feel free to share anything about Indiana Jones and the Last Crusade (1990) here!
[Reply] 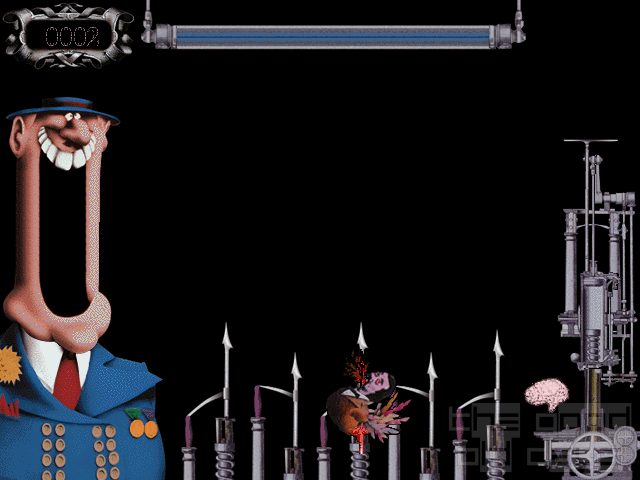