The Addams Family
for Game Boy 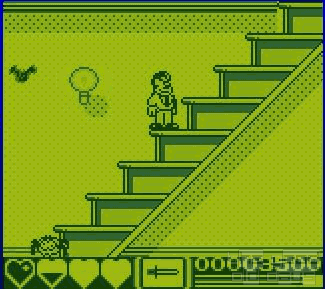 Talking about games that deal with films or series, sooner or later the phrase “licence crap” will come up. Many more or less common titles, for example almost every Simpsons game, do give reasons for this: The brand name itself is selling most of the copies, so why spend money on a complex production? Quickly design some sprites, that remind of the original characters and warm up some old games idea and the way into the shelves is paved.

The Addams Family for the Gameboy only partially reflects these criteria. Behind the admittedly shopworn and hardly original facade, a solid and challenging Jump & Run is hiding, whose potential to develop requires some practise. I generally like most Addams games for all platforms as there are plenty of them, for example three for the Super Nintendo. The grotesque humour of the series is more or less successfully flowing in, while the games for themselves, despite the generally high difficulty, fit into the “casual gaming” category.

But let's talk about the game I wanted to look at. You are taking the role of landlord Gomez Addams, whose family has been kidnapped by the mean lawyer Tully and is hidden in different parts of the Addams manor, that fit to them thematically (for example Wednesday is hidden at the graveyard while Pugsley can be found inside his toybox). As you guess those hideouts are guarded very well and at their ends, there is always a boss waiting, for whom to beat you will need a special strategy. At the start you can just jump and throw daggers, but at the end of almost every level you can find more (kind of bizarre) weapon options like a golfclub or ice cubes. After mastering all levels, the lawyer himself is waiting for Gomez kicking his butt, of course.

The graphics are quite nice, looking at them without motion. Lovely done levels with great variety and quite big character sprites, whose details can be clearly seen even on the gameboy screen. In motion the game is running fluently, but you can see, that the animations contain very few single frames, a detail that is especially noticable at the otherwise pretty cool bosses, sometimes consisting of only 3-4 frames.

The sounds are appropriate but the music is without a doubt a highlight. The Addams theme is done extremely well with the technical possibilities of a handheld and the stages mostly have their own fitting background music. My favourite is the toybox theme - quite catchy...

As you can expect, the gameplay is quite simple. With the exception of the different weapons, the Addams Family is a basic Jump & Run with lots of tricky passages. The energy bar allows some failures regarding enemy contact, but at more difficult passages jumping too short can mean immediate death. This has to be avoided at all cost, because after a limited number of lives (no extra lives are granted during the game) no continue is waiting for the player, not to mention a save option. So the difficulty is challenging but not unbeatable and it's clearly varying between the levels. For those who have already played an Addams game, it can be said that the tradition of the freezer as the ultimate challenge has not been broken.

Although Gomez may choose between almost all hideouts from the start on, the game is relatively linear: Often, you need a special weapon to beat the final boss of another level (Greetings from Mega Man) or to master a special passage somewhere else. The main challenge is to find out the optimal order, in which you play the levels. The frustration of not being able to beat a level due to missing equipment is kind of short, because the somewhat brief length of the game allows you to get back to the last place visited quickly.

For Jump & Run fans, the Addams are worth a look, this also counts for fans of the series. I for myself am putting it into the gameboy from time to time, because after you have once mastered every passage, you can beat the whole game in about half an hour, which is always a good one.

Vemperor:
Feel free to share anything about The Addams Family (1991) here!
[Reply] 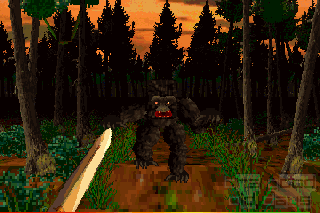