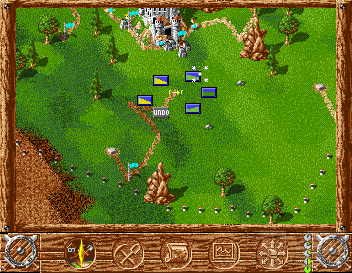 If I were to name one single game which impressed me most in the 1990s, it would not be one of those heavily parallax scrolled action titles or one from the emerging 3D shooter genre and neither a laugh-out-loud party like Monkey Island or Eric the Unready. Reaction games, while fun for some time, have never been grabbed my attention for long. Plot-driven games, while potentially amazing first time around, hold the issue of never being repeatable in their experience. Simulations of complex world models, on the other hand, can offer endless variety. They "just" have to avoid being too simplistic or too dry. Enter The Settlers.

Starting from an impressive castle, equipped with more or less impressive starting resources depending on intended difficulty, it is the player's task to build up a functioning economy from the ground. Ideally before the other rulers active on the map hog all the natural resources. There's a forest? Let's chop some wood. Rocks? Send the quarrymen. What may be found in the mountains? Iron ore? Coal? Maybe even gold? Let's survey and if those prospectors find anything build some mines. Oh, the complete forest is gone now? Let's plant some grain for later harvest. 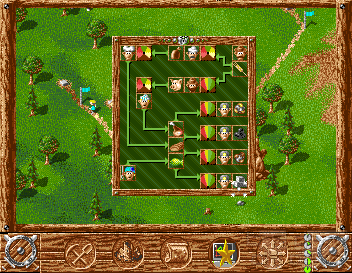 The underlying economic model hits the sweet spot of complexity and accessibility. Raw materials can be processed in different ways, sometimes in more than one step. Coming from the mill, grain can be used to bake bread or fed to the pigs, which in turn can slaughtered later on to produce food another way. Fishing provides instant food on the other hand, but output is limited. Coal plus gold equals bullion, but coal can also be used to produce iron. Iron can be forged into weapons or tools. And so on.

Meaning The Settlers is, on the one hand, a game of setting priorities. There is never enough of everything for everything. Taking good decisions and adapting them as the game goes on is key. Which construction site needs a delivery of wood most urgently? Which mine should receive a new helping of food so that the miners actually perform some work? Knowing that even when they win something, it will take several further steps (and therefore time) until the final product can actually be used.

The excellent design decision being that none of this needs to be micromanaged. Instead, the player uses generic menus to set priorities which will then be globally and automatically carried out. Some of these menus may only be semi-intuitive, but once understood, you won't want to miss them! 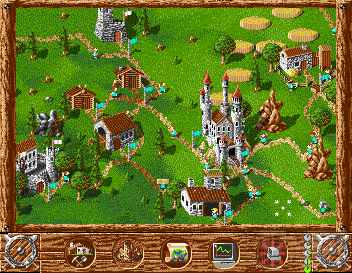 On the other hand, it is a game of optimizing space. Putting a sawmill close to the forest is common sense to keep transport distances short. Though better keep those trees away from your spacious farms in order to increase the latter's effectiveness. Is it really a good idea to have all materials not needed immediately back to the initial store in the castle or could there be smaller decentralized ones in different places?

What is a suitable place for a large stronghold, considering its protection effect for surrounding key buildings, but also its potential as a training ground for later offensive action? What's the ideal density of such military buildings, taking into account that if each covers a large area, you are vulnerable to attacks, but on the other hand, they take up valuable space (of which you will obviously never have enough) and also, do you really want to spread your forces thin?

The long-term goal of supremacy on the map is organically split into various phases or steps. Get the production of basic materials for construction running. Secure access to promising regions to mine. Kickstart food production. Turn the raw materials into gold (literally or figuratively). 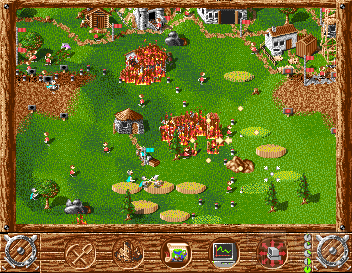 Another victory on the battlefield!

All this decisionmaking is performed on a graphical map. Small settlers are moving around in real time, their sprites and animations easily rivaling the famous Lemmings charm. Though things don't stop there. Wind blows through the treetops, small animals move around… none of this is in any way necessary for the gameplay, but along with the music and sound effects, it makes for an amazing, calming atmosphere.

Meaning on the technical side, The Settlers is a sensation. There is always so much going on on the screen and it is nevertheless running so smoothly that it is hard to imagine that this is still (virtually) the same computer on which a simple two-coloured bouncing ball dropped jaws in the mid-80s!

One of the few minor issues is probably the interface, as hinted at before. Although a clear intention to let the player control everything with the mouse and usually give commands immediately on the map (and otherwise icon-based, graphical menus instead of walls of text) is visible, for sure some left or right or simultaneous clicks are not exactly intuitive. They work efficiently once taken in, though, so even this turns into a non-issue after some hours. 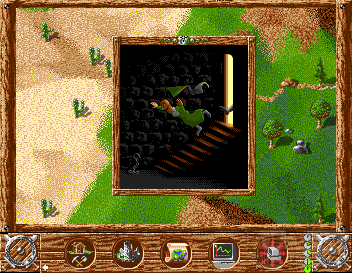 Also, each game suffers from the long endgame, as common in global strategy games. It may even happen that one player achieves a clear position of dominance, but it may still not be sufficient to officially win, ever. This makes playing random maps, where players can set their own winning condition, much more attractive than the rather forgettable "campaign" (which is nothing but a series of pre-made maps with no link between them anyway).

Keeping perspective on the big picture, however, it is clear that The Settlers is a game for the proverbial remote island. Even if the steps will be known after the first few games, their assembly, order and priority will need to be different each time, based on the distribution of opponents, landscape etc. And believe it or not, if you happen to have company on your island, you can even play splitscreen on the same machine. So remember to bring two mice with you!

British and American games usually keep their names when they're released in Germany - even if it's a translated version. That's good, makes international conversations about them easier. German companies on the other hand sometimes take really silly measures to increase their chance on the international market. Not that it has ever worked, but giving up would be silly, too. One of the effects is that German games have English names - even here. If you can't see anything strange about that, you're probably from the USA. What would you think if a game by an 'American' company would carry a title in Suaheli? To take it one step further: what would you think if a game by a German company was released in your country carrying a German title?

Insinuating a negative answer, that is exactly the ignorance which leads to such a mess as with this game. It couldn't have been released as Die Siedler (the original name) internationally. The direct translation is The Settlers. Alright, acceptable. I've also seen the same game listed as Serf City on some sites - presumably the title in the USA. Extremely annoying for an international (and even bilingual) site! Especially since it's all so unnecessary.

It isn't surprising that Die Siedler (I will continue calling it by its original name) received both critical acclaim and popularity with the customers in most parts of the world. It does deal with the most typically 'German' topic of all: business. Business disguised with a pretty facade though.

On an empty landscape, you have to build up a small 'kingdom'. The first step is to build a castle which serves as a storehouse. With the goods you have initially (depending on the mission/scenario), you can construct a few more buildings then.

The buildings can be split into three types: those which extract raw materials directly from the land (e.g. lumberjacks, mines), those which refine these raw materials to usable goods (e.g. sawmill, smithy) and those for military.

The latter are used to stretch the borders of your country further and of course to protect the other buildings. Protection is needed because there are other 'kings' and their people as well. In the end, military victory is required, but it's only a minor aspect of the actual gameplay.

What you're actually occupied with is building up a working economy. Understanding the interconnections and 'production lines' is important: to produce weapons, your smithes need coal and iron. To produce iron, you need iron ore and coal. Both these can be obtained from mines. The miners demand food to work. Food can be either bread (farm - mill - bakery) or meat (farm - pig farm - slaughterhouse). If you could follow this example, you understood the whole game.

Unlike in most similar games, you not only have to care about the existence of the crucial buildings, but also of their connection. You build roads on which little sprites carry goods from one building to the other. If your roads are built ineffectively (too long, too steep), you'll run into problems, because your factories won't run.

Die Siedler is a very untypically 'German' game in the aspect of the presentation. There are the usual dull statistics and boring menus, but they only exist well hidden and completely seperated from the main window. A bit of this was of course necessary to give the game its deepness.

The military aspect of the game is fortunately very small and unimportant. Its outcome seems like only a direct consequence of the economic performance. If it was for me, it could have been scrapped completely. How this would have looked then? No idea, it's not my job to design games - I'm only critisizing them

To me, this is a business game which has nothing to do with war - one of the best ever.

Technical notes: This game makes heavy use of the overscanning capabilities of the Amiga. That means it uses parts of the PAL screen which are out of the normal 320x256 limits. When you're running the game with an emulator, choose the resolution accordingly. On a real Amiga, you shouldn't have this problem of course.