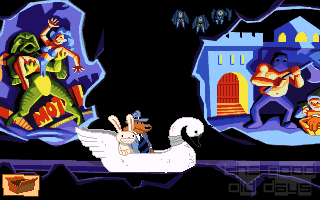 Which character appeared most in Lucas Arts' Adventure games? Chuck the Plant, I guess. Just counting the mammal characters, though, it's Sam & Max. Their creator, Steve Purcell had been drawing backgrounds for many of the games, and Sam, the dog, and Max, the rabbit, had small guest appearances (e.g. as an idol in front of the giant monkey head, as a costume on Booty Island and as a portrait in the Edison's motel). And then, it was time for their own game.

Sam & Max are a dynamic detective duo located in New York. As they return to their offices after saving a girl from her psychotic android scientist date, the commissioner calls with a new assignment: Bruno the yeti, who has been the attraction of the hall of oddities in the local amusement park, has disappeared from the block of ice which had held him for years. His owners (twin brothers joined at their backs) want him back. Trixi, the woman with the giant neck, has disappeared as well.

It's already obvious - Sam & Max is an adventure in the classic 'wacky' tradition. And this small introduction hasn't even really scratched the surface of the crazy journey across the USA, sending the player to such places as the World's Largest Ball of Twine and the Mystery Vortex, having the protagonists play Gator Golf and doing Bungee Jumping from a famous nose at Mount Rushmore and involving such colourful characters as Country singer Conroy Bumpus.

Gameplay-wise, the game takes the only logical step after Day of the Tentacle hadn't actually used the classic verb system anymore: The scenery is shown full-screen, and the actions are selected by cycling through the actions with the right mouse button. Sierra ahoy! Neither is the inventory visible, but it's hidden behind the only icon left on screen. Of course, this works. It's easy enough to understand. However, after clicking the right button just one time too many once again, you'll want the classic controls back.

A somewhat novel idea is that of the two protagonists, only Sam can actually be directly controlled by the player. If you want Max, who is at his best whenever a situation calls for brawns, not brains, to do something, you can 'use' him like a regular item. The obvious way would have been asking him to do it, of course...

Talking about talking, you don't get the usual multiple choice dialogue trees, but a bunch of icons representing certain topics. You can't choose what to say exactly. This may have its advantages (which really escape me at the moment), but it robs the game of many amusing lines of dialogue. Also, you never know when you've actually exhausted a topic, because the icon always remains the same - no matter whether there's something unheard behind it or not.

So, many things to complain about. Yet, the game is amazing fun! That's because it's set in a world which really makes exploring and experimenting fun. Sure, it's somewhat linear and puzzles aren't too hard (but there are puzzles). Aside from the straight walkthrough, there are lots of little details, though, which just make all the travelling worth it. Just when you thought you had seen it all, you meet another loony or another 'trendy' subject gets its satiric treatment (the 'Virtual Reality' bit still has me laughing out loud each time Sam makes his sarcastic comments about badly polygonized princesses).

Special praise has to go to the music as well. The title track is just excellent - I put it on sometimes even if I don't want to play the game at all (rarely happens with computer game music). And, of course, there are a few mini games within the game to lighten the load on the brain in between. Nothing out of the ordinary, but a quick round of Whack the Rat or Car Bomb can be very relaxing.

On the whole, Sam & Max really is a logical evolution of the Lucas Arts line. The negative trends concerning interface and general easiness found in DOTT are spun further. However, they do what they did best here: Tell a really, really funny story and embed it into a fair and relaxing game. So, really, a highly enjoyable adventure! 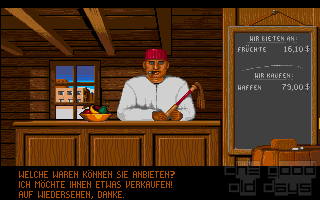