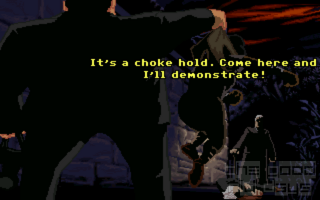 To get this off my chest right from the start: I'm neither a teenager, nor in any sort of midlife crisis. Not the best prerequisites to enjoy a game about middle-aged, burly (and apparantely a little simple) men whose life consists of driving around on comical, impractical vehicles. At the risk of being beaten to pulp to bald guys with beer bellies: bikers are not cool! 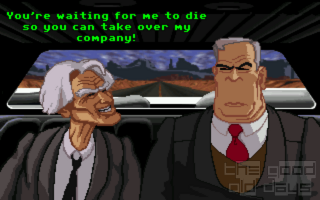 Corley and Ripburger
Full Throttle came out at a time when Lucas Arts could have released anything, though, and I would still have bought it without second thoughts. What I got story-wise is a somewhat unexplained and quirky 'futuristic' setting: Apparantely, there's just one manufacturer of motorcycles left - Corley Motors. Its founder and boss, Malcolm Corley, is on the way to the shareholders meeting with his second-in-command Adrian Ripburger. Ripburger, being clearly evil, is trying to take over the company and have it produce minivans instead. To achieve this, he goes as far as killing Corley and framing the murder on the protagonist. Cue to standard prove-your-innocence-and-make-the-bad-guy-pay story.

Now, this story remains a little sketchy, and the paper-thin characters don't exactly help. Already in the intro, there are a few eyebrow-raising moments. For example, why does Malcolm Corley, self-professed ex-biker, have anything against the idea of having a gang accompany them to the meeting - only to shout "Now there's some boys I could ride with!" 30 seconds later? Why does Corley have the villanous Ripburger around him anyway? "You've got business instincts that I respect", he claims - yet later, he says Ripburger belongs in prison. And Ripburger himself? What's his motivation for turning Corley Motors in a minivan producer? If he were in it just for the profits, why throw a monopoly away? It must be about some kind of 'evil conspiracy' thingy - but that's never really explained. If your own connotation with bikers is 'freedom' or whatever along these lines, you'll probably get it implicitely.

Being Lucas Arts' first real CD-based Adventure (although CD versions of their former releases exist, they were still primarily floppy games juiced up a little), expectations concerning the production values were high. Surprisingly, they went a very conservative route technically: Graphics are in the classic 320x200 resolution instead of the trendy 'high-res' of those days. There are spots of 3D modelled imagery, but this is used sparingly and incorporated well into the hand-drawn surroundings. As so often, less is more, making Full Throttle much more attractive to look at than most games of that time.

Of course, all dialogue has been recorded. Voice acting is generally alright, but with a large range. The protagonist (Ben) fits very well with his monosyllabic tough-guy character (as long as one assumes that the game is meant to be funny - which I wasn't completely sure of at times - but he does get some good lines). Ripburger, on the other hand, voiced by Mark 'I had no roles since Luke Skywalker' Hamill, isn't even funny as a caricature! I'm all for clichéd 'evil' villains, but this one doesn't even have any style with his in-your-face villainous tone.

Classy intro
However, the key term was 'production value'. Again, Lucas Arts understood this a lot better than their competitors: It's not the technology involved, but the way you're using it. And so, in spite of certain shortcomings, Full Throttle is one of the most 'cinematic' games ever produced - easily surpassing all those 'interactive movies' of the time in that area. Why? Sure, it has no 'real' actors, but it has the 'feel' of a movie. The style of narration (the first few lines actually had me hoping this would go into a 'noir-ish' direction - which it didn't), the cutting technique, the use of music - that's the key components. A huge achievement in this respect (and quite frankly, this is the only reason the game gets an above-average rating).

Now this review is already twice as long as some others, yet there hasn't been a single word about gameplay yet. That's for a reason: There isn't much to say. Everything you've already read is true: The game is short, the game is easy. It's basically a large cutscene with the player only doing a few clicks here and there in between. Puzzles are virtually absent (opening a lock with a lockpick doesn't count as a puzzle) and the goals are always explicitely spelt out for you ("Get me these three things from these three accessable places"). With your inventory being automatically emptied every few minutes, there isn't much to try out, either. Disappointing. 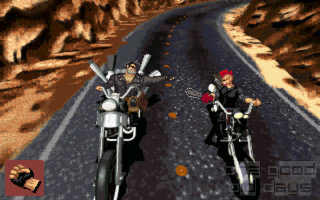 Could have done without this...
The only places where you might be stuck for a while is the action scenes. One particular annoying one takes place in the middle of the game: You have to win a series of duels against other bikers. Not racing duels, but beating duels (while driving). At least they tried to make it interesting by including different weapons which can be used with differing efficiency against the different opponents, but again, that's paper-thin and once you've figured it out, you still have to go through yet more annoying encounters waiting for a specific enemy from whom you need something to turn up.

Well... it's hard to give this game a rating. It should be already obvious it's an utterly disappointing affair, yet disappointment is also caused by high expectations. You can't blame a game for coming from a company which usually does way better. And, as mentioned somewhere along the way, the game does have a certain edge in its storytelling (as stupid as the story may be) and audiovisual techniques. So, I'm giving Full Throttle a 4 - reluctantly and barely.

Full Throttle, the game is a simplistic cartoony point and click adventure game about a biker, set at some point in the not too distant future. The protagonist of the story is one "Ben What's-his-name", the leader of a biker gang known as the Polecats and follows his fairly predictable linear story. Ben is trying to clear his name and the name of his gang after being framed for murdering Malcolm Corley, the head of the last motorbike producing company in the world. To do this you have to guide Ben though a series of encounters and puzzles to bring the true murderer to justice, clearing himself and the gang of wrong doing.

The game flows as a point and click adventure for most of the way, but is interrupted by an action game style set in the middle, where Ben needs to beat up other bikers to gain the equipment he needs. The game is not ground breaking in any way, though it is one of the first to use mostly external voice actors.

The game's flaws are pretty glaring, the puzzles are far too simplistic and not difficult in the slightest, to the point where other characters can tell you exactly what you need and what to do. On top of this, most of the characters are shallow with little to no development, consistency or explanation and some of the plot is a little shaky; why did M.C. wait to tell the world about Maureen if he realised years before that hiding her had been a mistake? How did Bolus get back to the scene of the murder without transport? What is Ripburgers' fascination with minivans? Nobody knows...

There's also pretty much no environment to interact with and what little there is becomes more obscure for it, for example hiding from the police at the gas tower is not a difficult puzzle to solve, but is one of the only occasions you'll move behind something. Yet despite these flaws the game does have some good things going for it.

For a start, and most importantly, the game is fun. Even though the puzzles are easy, they flow quite nicely and are fairly logical. The music fits to the mood of the game and the animation is superb. The in game interface is novelly designed and very easy to use, a single panel in the form of the Polecats logo (A skull at the top, fist to the left, boot to the right with PC in the centre and a banner labelled polecats at the bottom) is brought up when holding down the left hand mouse button, the fist represents take/hit the boot kick, the skull can represent eyes for look or a tongue for taste/talk to the centre is for the inventory and the banner has the name of the person/item targeted instead of Polecats written on it, this works nicely as there is no item combinations and using anything is a simple matter. The cut scenes are cinematic and beautiful, from watching Malcolm leaning out of his limo to Mo fixing a toaster, the animation is smooth and pleasant matching the style of the game. Though pretty much a cookie cutter story, it's still an enjoyable one with some amusing moments; I'll never forget sending robo-bunnies over a mine field to Ride of the Valkyrie or annoying Emmet into letting me stab Ben in the hand repeatedly.

Overall I give the game a 5. It's a fun well flowing game with little to no frustrating parts that would suit people new to the point and click adventure series looking for something simple to test the water with and it makes a nice leisurely game for any seasoned player.

I found the game fun and engaging despite its faults and lack of difficulty, however, if you're looking for mind bendingly difficult puzzles with a fully interactable environment and deep well thought out characters placed in a complex story; this probably isn't the game for you.

Darishnoo (2008-08-05):
Quote:
Full Throttle, the game is a simplistic cartoony point and click adventure game about a biker, set at some point in the not too distant future. The protagonist of the story is one "Ben What's-his-name", the leader of a biker gang known as the Polecats and follows his fairly predictable liniar story. Ben is trying to clear his name and the name of his gang after being framed for murdering Malcolm Corley, the head of the last motorbike producing company in the world. To do this you have to guide Ben though a series of encounters and puzzles to bring the true murderer to justice, clearing himself and the gang of wrong doing.