Dangerous Dave in the Haunted Mansion
for PC (DOS) 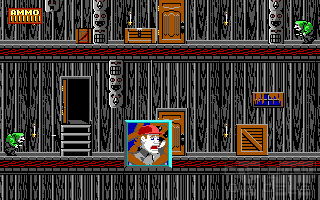 The main problem is: you die, you restart the whole level. No continue points, no health, nothing that can save you. You have bad luck and a monster jumps over you? Back to the starting point. You fall on the wrong hole, not having any way to know what is on it? Back to the starting point. And it can be easily solved, as was a pair of years later with Biomenace, which uses the same game engine.

It’s easy to spot the similarities, most noticeable are the doors all around the place that when opened show an object or give you access to another room, or to the next stage. A novelty that could have been more useful had they put something more than points on them.

Anyway, the main gimmick on the game is the shotgun, with just eight shells and the brief delay between shots you can’t make your way with fire and lead. No fast and simple action. If you want to shoot make sure you won’t die trying.

Oh, it’s true, there is the other gimmick, the gory deaths. Each time you are killed, by anything, there is a short cutscene showing a ridiculosly violent death which is pixelated, silly, and not adding much to the game.

Well, right now maybe the game sounds interesting, or even fun, and to some extent it is, yet each time I play it I hate it more. You can say it is a hard game, and I’m not against hard games, but this one is for masochists who like dying at the end of the stage just before crossing to the next one and finding themselves again at the beginning.

That’s the final point, just what I said at the beginning, and what I think each time I see this game, prepare yourself for playing again and again each level.

Herr M.:
I think like with most Shareware titles the buzz was mainly because of two things: The games were free and had next to no competition (on the PC).
Mr Creosote:
Well, I wouldn't say it's a bad game. It's just hard to understand the big buzz around it.
Herr M.:
It might be said fuzzy nostalgia, but I do have some rather fond memories of this (and similar games, mainly from Apogee). It was hard as hell, yet the setting was cool enough to keep me motivated.
Moebius:
Yep, exactly...

Mr Creosote:
Yes… I'm afraid this game – like many of these shareware pieces on the IBM – is just subject to severe fuzzy nostalgia attacks for many.
Moebius:
For some reason this game never really excited me... it was too dull to be honest, and just shooting monsters endlessly and going somewhere would bore me too quickly.
Aspirin18:
First ever game on my PC.

Wandrell:
Feel free to share anything about Dangerous Dave in the Haunted Mansion (1991) here!
[Reply] 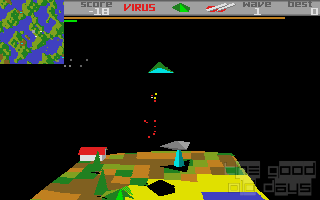