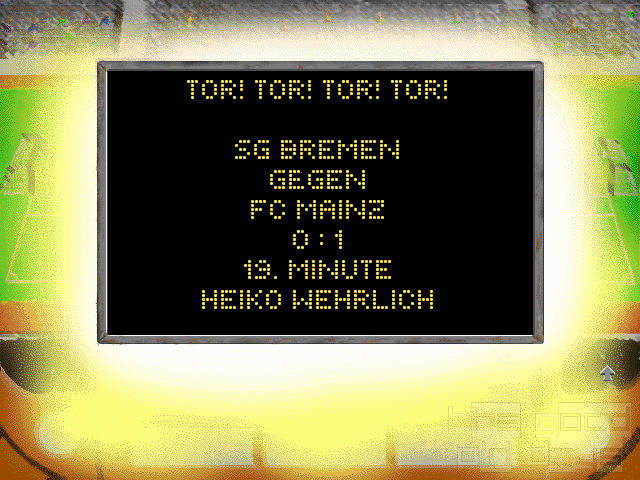 Germany's favourite minor matter - again - football! This game fell into my hands for 5 DM on a rummage table. Well, I could give it a try... ok, that try resulted in long late-night gaming sessions. Hattrick has one of the best user interfaces and features like the goal scenes, the articles about the games in the newspaper and the team of the day get you in the mood. Unfortunately, the game comes without a licence from the DFB, so the authors couldn't use the original names of the teams and the players, but there is an editor to rectify this.

The balance between details and statistics on the one hand and simple controls on the other is pleasant. Basically, you can just jump right in and let the coach do his job - because from the start, you're just the club's manager. Of course, you can fire the coach if he isn't successful (or even just because you don't like him

) and hire a new one - or you can take control yourself at any time and botch the coach's job (or show him how it's really done). This isn't recommended for newcomers, though. You'll have enough to do to just keep things running: organize sponsoring, expand the stadium, buy yet another player (or borrow one from another club). Normally, the coach will do an ok job.

Of course, it's the hopeful young manager's goal to get to the real money with his team which has just only reached the third league. To achieve this, the modest 16000DM coach has to make room for one Franz Beckenhauer (any resemblence with actual persons is purely coincidental, of course

) and the old, trusted players are pushed off their positions by international stars. Credit level is rising and finally, the day is there: After rushing through second league, you're finally competing for the championship. Maybe, you've already won the cup when you were still a second-leaguer (well... that's possible on the lowest difficulty level, but otherwise...) - and now, the Champions League is waiting! Of course, the daily work doesn't look quite as rosy. On the average difficulty level, even the third league isn't kindergarten anymore. But the football gene in all of us will help us through this, of course, and before I start telling you about every detail, I recommend you check it out yourself. Hattrick is still one of my favourite football management games.