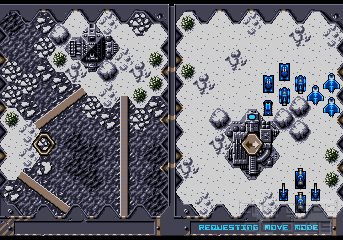 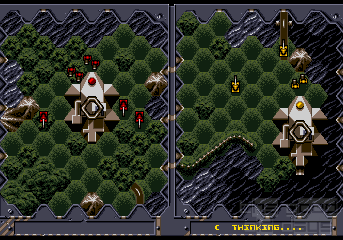 What many people who pirated the game missed was not only the excellent docs, but also the single player mode (!). Battle Isle was one of the first games which stressed two player mode over playing against the computer. You're always playing on a vertically split screen, left side for player one, right side for player two (no matter if this side is controlled by a biological or electronic brain). Both sides can give their commands at the same time and when they're finished, the results are shown. In order to avoid illegal actions like two units moving to the same hex, one fraction is in 'movement phase' while the other is in 'attack phase'. Planning ahead gets more important because of the available commands switching back and forth in the turns. 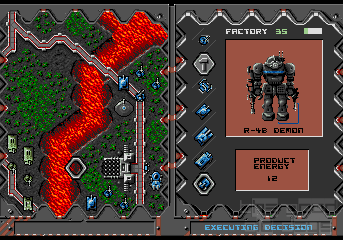 To get back to missing the single player option: instead of saving your progress to disk, Battle Isle uses passwords for the levels. The default password on starting the game is the first map for two player mode. To enter single player mode, you have to know the right password - which is listed in the manual. Without the manual.... tough luck (good thing you're reading reviews: the password is 'Conra'

Hex-wargames would never be the same again after Battle Isle. Other companies adopted the ideas laid out here, because they were good. They were making this genre more accessable and therefore ensuring the survival of such games on the mass market for several years.

Other German companies couldn't take any advantage out of the inernational attention this game received though. They carried on producing their dry business simulations in which nobody was interested. Almost none of these companies survived - but then again, so didn't Blue Byte...

Mr Creosote:
Hm, admittedly, when I last gave it a go (this year), I found it somewhat cumbersome. The extremely limited production and repair resources stressed me. Maybe I'm not as tough anymore

Hmmm, almost feel an itch to play "just one level"â€¦

Rogue:
One of my favorite turn based strategies. IIRC I got somewhere to level 12 and could not figure out how to complete it, so I never completed the game.