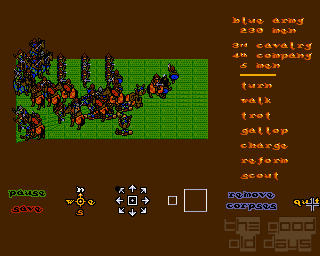 Touted as a “wargame for people who don't usually play wargames”, Prince is one of the many attempts to make the genre more appealing to a broader audience by adding attractive graphics, easy mouse controls and make the gameplay a little less complex (or more shallow, depending on your point of view). It is also one of the many in the long line of games to have tried this and failed.

The basic setting is an island where two rulers are sending their armies at each other's throat to finally gain control of the land. You can set a few options, like selecting one of eight pre-defined islands, selecting army size and the type of units (knights or footmen). There are three settings determining if and when the enemy becomes visible (you'd probably call it 'fog of war' these days) and last, but not least, the game supports multiplayer via serial connection - even cross-platform, i.e. between an Amiga and an Atari ST, for example.

Then, you're teleported to the battlefield itself. The first thing you'll notice is its small size: Even on the lowest visibility setting, you'll run into enemy units pretty much immediately. On the other hand, that means there won't be much time / space to arrange your own army into clever positions.

On the whole, there are three zoom levels. The lowest one shows your army grouped by regiments represented by icons. To give orders, though, you have to go to the next level. Here, you can see the actual landscape and little soldier sprites. Clicking on a regiment, you can tell it to move (at different speeds), attack or regroup. Zooming in even more, each of the sprites seen before is unravelled into single soldiers. Here, you can give orders to smaller groups.

The glaring oversight: Only one zoom level actually provides a viewport large enough to be useful - the first one. However, the interface doesn't allow for orders there. So you have to do it on the fiddly next level. Moving a whole army becomes extremely painful especially because you can't tell your units to go 'into a direction', but only 'where' to move. So the target has to be visible on the same screen as the unit itself - that's about five steps along, no matter in which direction. After that, the unit stops and you have to give it a new target again. Do that with ten regiments (which all become mixed up within seconds) and despair.

The actual goal of the game is to kill the enemy prince - that's the knight wearing a golden armour. Once one of the princes is dead, none of the players can give any orders anymore, but the units will carry on doing what they've been told to do before. So, it can become a draw again if the other prince dies as well. Surprisingly, the largest zoom level turns out to be somewhat handy when the real combat begins: To single out specific enemies (like the enemy prince), it is essential not only to zoom in as much as possible, but also to make use of the 'remove corpses' option, because otherwise the screen just turns into a red/blue indistinguishable mess.

Still, it has to be said that the whole thing is quite shallow. The player with the larger army is bound to win nine out of ten times - and the tenth time, it'll be a draw. In theory, the good-looking 'Populous-esque' landscape with its different terrain types, the stamina of the units after being chased around the island and the type of unit (Spearmen are supposed to be strong against Knights, but weak against Swordmen and so on) should all influence the tides of battle, but only little can be actually noticed or really tried out when the armies are clashing in a chaotic struggle - of which you'll only ever see a tiny fraction anyway because of the lack of overview.

So, yes, Prince looks very good and the title music is excellent. However, there's little meat inside, and even the few things the player can do are complicated by the combination of how the controls work and the graphical perspective. According to the manual, it was 'designed as a two-player game'. Indeed that might be the only thing it's somewhat useful for. 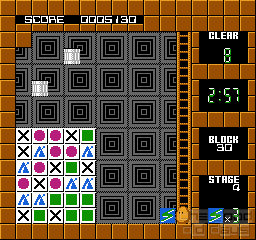