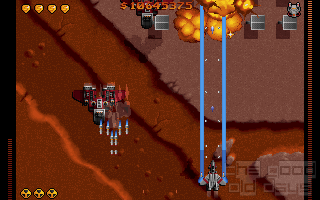 It took a long time for classic arcade style genres to gain some basic foothold on the IBM PC platform. For years and years, shoot 'em ups remained largely tied to Japanese consoles and even home computers, with their hardware supported sprites and scrolling. Though then, some companies had shown what could be done with superior raw processing power, so it had to be just a question of time. The first ever actually noteworthy genre entry on this system: Raptor. 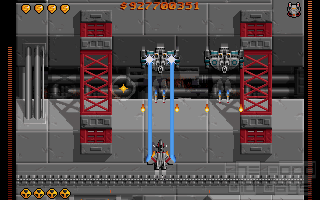 This not being an arcade conversion, but an original development shows in a number of ways. Controls are geared towards keyboard use, with weapons selectable through number keys. There is no password system, but free saving between levels. Ah, the comfort of a hard drive! Finally, maybe most importantly, the game appears targetted not at a teenage audience with lightning reflexes and way too much time to train them, but towards computer owners returning home after a long day of work and prefering a comparatively carefree, but nevertheless challenging shooter.

Wait, what does this mean? The shoot 'em up genre has traditionally always been one for specialists. There is hardly another one where average game difficulty is this high. Terms like “bullet hell” have been coined for a reason. The core audience often considered the hardest game to be the best.

Going down a different path in this respect, Raptor does away with with many of the genre tropes while staying absolutely true to the core game mechanics formula. It never expects its players to learn levels by heart. Little hints, like the radar or the shadows drawn by approaching enemies, make situations generally foreseeable. Speed is not cranked up to insane levels. The player's ship does not explode at first hit, but is subject to a fairly generous energy bar. Which, on the other hand, is not so generous to be ever wasted with careless flying. Talking about flying, the ship even has some fairly “realistic” inertia (as far as “realism” is a factor in a game which is all about blasting hundreds of enemies), giving quite a distinct feel to handling it. 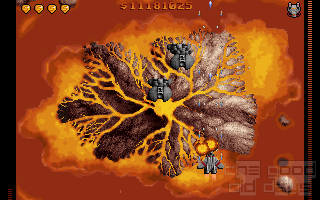 Coupled with that, the game incorporates a number of proven genre standards. Many enemies have their own distinct behaviour patterns. Both air and ground targets appear and weapon effectiveness differs quite a bit between those classes so that quick switching in the heat of action is quite necessary. Speaking of weapons, new ones can be collected within the levels, but may also bought in the shop between them (along with other extras, such as additional shields). This is another strength of the game, insofar that none of the weapons is clearly the ultimate one. Apart from the obvious ground/air distinction, another example would be the choice between target-seeking weapons and dumber ones which just fire forward, but with much more destructive power.

A catchy soundtrack, good sound effects, nicely drawn explosions, huge bosses and little gags complete the overall package. Raptor did not re-invent the genre, but then, it never tried to. It did, however, bring the genre to a platform where it hadn't happened before and adapted it on the way to fit the predominant player audience there. In our age of much less committed gaming, it remains well worth playing.

Moebius:
Oh yes, this was actually one of my very first PC games and i enjoyed it hell of a lot

Also, as a kid i thought it would never end, but give me more and more new stages...
Mr Creosote:
Well, Raptor is obviously aimed at 'casual' gamers. You know, the adult gamer who comes home from work and just wants to relax in front of the monitor a bit. That's the kind of person who'd own an IBM PC at that time. Not the young 'expert' gamers with sharply trained reflexes who'd of course prefer the likes of R-Type.
Wandrell:

Wandrell:
Feel free to share anything about Raptor (1994) here!
[Reply] 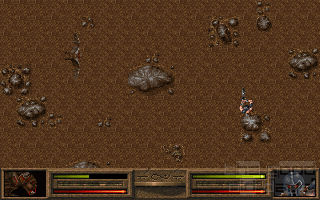