Simon the Sorcerer
for PC (DOS) 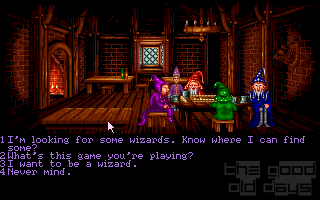 The dog (don’t ask me how did he climb the hand ladder) finds a magical book on the attic. An old, boring and dust covered book, which for no apparent reason opens a magical door when Simon throws it away. A door reaching another world, one filled with parodies of fantasy stories.

But first, as in any graphic adventure you will travel around collecting random items for opening new paths later. Ok, this is not one of those few games of the genre that creates a new kind of game, maybe the story gets you hooked, let’s take a look.

It is fun and funny. Nice but there are many games like that. The jokes here are parodies of folk tales and heroic fantasy, which ends being a mixed bag. On one side you have those folk tales that are know, not a problem as there are few games around them. You get also some not well known all around Europe (who has heard of tales with trolls in Spain, for example?), good as not all are the obvious and famous. And then you get the obvious and famous jokes about fantasy with naked barbarians and magic rings.

So the story doesn’t mark it apart either. Worse, I said it’s funny but also I didn’t say it would make you laugh. The jokes tend to fail, some even are too long for a joke. Take away the easy jokes already done plenty of times and you still have nothing remarkable.

What makes the big impression when playing are the graphics. See all those screens you cross, pretty places filled with details and a personal style. I don’t fancy those characters as much even thought they are well animated, but the landscape is something to remember, filled with details like all those faces hidden on the rocks.

Yet don’t lose hope. I repeat, it is fun, just not as much as other games. So if you like graphic adventures try it, you may enjoy the game.

The blatant Monkey Island rip-off of the first few scenes put me off so much that I didn't seriously touch the game for years.

Too much to get through as a homage. In fact, only after I played through the second one and liked it did I pick it up again. In the end, it was a pleasant experience, but I still can't imagine what they were thinking...

Wandrell:
Feel free to share anything about Simon the Sorcerer (1993) here!
[Reply] 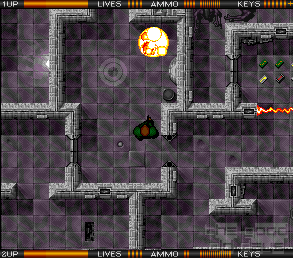