Anvil of Dawn
for PC (DOS) 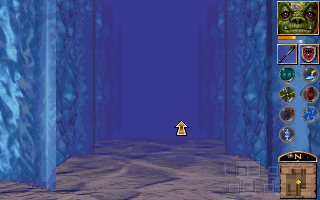 This is a little dungeon crawler where you embark on a quest, as usual. A quest for what you say? A quest for something big to help against the invading evil warlord. It’s the usual deal: you get a weapon, a few spells and many enemies to kill and corridors to crawl around, only this time it occupies a CD.

I would say those evil guys should be standardized by now: bad barbarian type with alien evil god’s dark powers, model ISO-3216. It’s not that you can’t do a nice game with a simple and shallow plot, but it’s not so hard getting a bit away from all the sword and magic clichés, or even from the dungeon crawlers clichés.

I’m sure you already know what the game is about without playing: the bad guy invades, the armies serve nothing and the king has the great idea of getting five guys to save the village from the bandits. I mean… to kill alone the invading armies.

But the king has a secret plan. Ok, five guys may not be a big deal for an unstoppable horde, but ONE alone surely can stop the big bad guy. So they sent you directly to a lost fort behind the enemy lines and tell you to look for a tower (a wizard tower no less) while the other guys risk their lives.

Then you start playing. 3D view, enemies with nice designs, even when they never get any farther from being something for you to bash away with your sword, nice animations and pretty graphics, just that you notice the walls are a bit weird and then… then you get out of the fortress and into the horror.

For some reason they thought plastic, ugly, computer generated landscapes where better than drawn ones. It’s beyond me; maybe the bad gods’ corruption at work made the place look like that, but travelling the world isn’t a pleasure.

And you travel quite a lot. There are many places to visit, even when they all look the same. You enter, move through monotonous corridors, get one character to say a few words and plenty of monsters to hack away until you get tired or finish the game.

zodiac:
I have to totally disagree with the sole review of this game. It’s a great game for it’s time. I’m going to write a more positive review shortly.
Mr Creosote:
Oh, but the number is important! The most villainous standard is obviously ISO 29500, but since your point was obviously to make it sound 'average', 3216 fits well. 29500 should be reserved to describe real baddies which stick out from the crowd and have an actual chance of achieving world domination

Wandrell:
And for those that look it, the number is not important, just being an ISO (even thought now I see it, probably the numbers came withouth thinking from binary: 32 16 8 4 2 1).
Mr Creosote:
For those who don't get the reference: ISO 3216
Wandrell:
Feel free to share anything about Anvil of Dawn (1995) here!
[Reply] 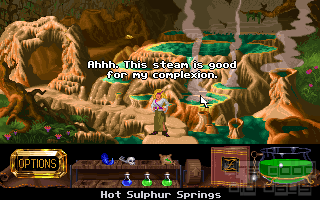