Lemmings 2: The Tribes
for Amiga (OCS/ECS) 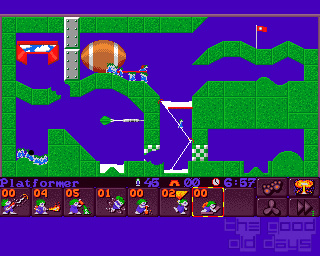 After they started milking the brand with lots of and lots of data disks, it became obvious there would have to be a real sequel to Lemmings to keep the fire alive. However, due to these data disks, how could that sequel just have been additional levels? Impossible - we need more!

The puzzle genre is an especially sensitive one in regards to balance. Make it too complex, and it becomes obscure; make it simple, and nobody takes it seriously. The tiniest nudge, and the previously perfectly balanced classic becomes a total mess.

The Tribes attempts the impossible task: extending on the original. Twelve different lemming tribes have to be evacuated from their homelands (there is actually some sort of silly background plot - as if Lemmings needed that), each of them unique in style (ranging from ancient egyptian to space). Each tribe has its own levels, and although they're linearly arranged, there isn't a minimum number of lemmings to save anymore; getting a single one to the exit is enough to progress to the next level. However, there is a catch: The surviving lemmings are carried over to the next level. So, in fact, it is all a single big task to get as much of the initial tribe through all levels.

Likewise, lemming talents have been diversified. This, although some of those talents are quite imaginative and funny, turns out to be a not-so-successful change. Once the initial chuckle has passed, it becomes obvious that many of them are in fact just different animations for the same thing - why have the 'stomper', for example? The ever-changing types of lemmings available just serve to confuse the casual player.

Thankfully, when it comes to the levels themselves, as little as possible was changed. It seems a few more gadgets (cannons, dinosaurs,...) have been included on the whole, but it all feels very familiar. Even the graphics are still pretty much exactly the same - none of the unnecessary visual experiments which later games suffered from.

Tragically absent is the ingenious two-player mode of the original. This, actually, is the biggest flaw of the game. Everything else is debatable, but leaving such an important feature out completely? Why?

To get back to the initial question of balance: In spite of the somewhat nice ideas, Lemmings 2 doesn't quite match the original. It lacks the spark which will just make you start (and keep) playing. Of course, the same fact could be interpreted positively: This is a slightly more advanced version of Lemmings which could be just right for veteran players.

Oh, damn, now the christian hordes will beat me up again for saying that

Santa Claus isn't christian, the three wise kings (the mage kings here in Spain) are. Or is it just on Catholicism? Winter holy days got so mixed with time, with all that sol invictus, Mithra's birthday, the changes to make christianism more easy to sell and god knows what else. I don't even get what buying presents has to do with christian virtues.

But making a few reviews on the other side really has high moral values. Or at least we (the people who writes reviews and the silent majority who read them) will thank you. And I must say it's quite easy to add reviews, Creosote did it that way because everybody wants to read more people opinions.

Mr Creosote (2008-11-04):
Quote:
By the way: I LOVED the X-Mas Lemmings spin-off! Just as a hint for December
I'm not a christian, so I don't believe in Santa Clause, but feel free to take care of it - you have access to exactly the same frontends to add games, upload files and everything related (I'm not sure if it would be best to treat it with its own game entry or just to add the files to the regular Lemmings page) like I do or the rest of the world does

I got it for the SNES on eBay last year, but the controls per mouse are quite better. The sheer mass of content makes it a good sequel, although its not quite original compared to the first part. By the way: I LOVED the X-Mas Lemmings spin-off! Just as a hint for December