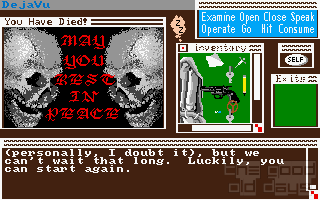 Interactive Fiction made more accessible: add graphics, add a mouse-driven user interface and use the capabilities of a modern 'windowed' operating system. But in spite of that all: don't forget about your target audience!

You wake up in a dirty public bathroom. Your head aches terribly and you have no idea how you got here. Typical symptoms of a hangover? Unfortunately, your memory doesn't only fail you regarding the last few hours or a day, but completely - amnesia down to the question who you are.

To make matters worse, you have a gun with three bullets missing - and there is a corpse in a nearby room. Nobody else in the whole building. Even in your confused state, you can imagine it won't look good if the police caught you like this.

Compared to oferrings of its competitors at the same time, Icom's first game is on the cutting edge of technology. The graphics itself are 'only' alright which is not surprising for a game designed for a Mac. It's the consequent split-up of the game's components into freely movable and resizable windows: the graphical representation of the current setting, the inventory, the verb list and the text box (amongst others) can be dragged around, put above or below each other - everything you're used to from your 'modern' operating system.

A fixed set of verbs and clickable items represented by graphics make puzzles easier of course. Deja Vu balances this out by successfully pretending to be non-linear. On the whole, it is suited for beginners and also not too long.

Compared to classic text adventures, the new genre of graphic adventures was often quite childish (I'll only mention the initials of the unspeakable: KQ). Deja Vu is different there. It clearly reminiscent of the 'film noir' period of Hollywood - as if Phillip Marlowe is about to enter the scene any moment.

What irritated me most about the game is actually its name. Deja Vu? Amnesia or Framed would have been a more suitable title! Sure, there are these flashback sequences, but they're not deja vus is the classical sense. Thinking about it, I've never played a game in which the actual phenomenon of deja vu is the topic. Could be interesting...

This inconsistency put aside, Deja Vu is an ambitious and more than worthwhile game. If you want some mystery and crime fiction, an easy introduction into something more text-flavoured or just some short diversion from your own dull life, this is where you should look. 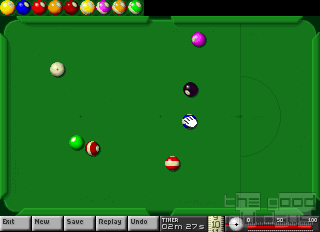