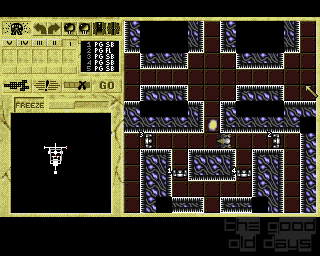 Warhammer and its spinoffs seems to be a very popular franchise. I even met a professor at university who professed his love for '40K' on his institute website right next to the list of scientific papers and books he had written and and who used pictures of 'hulks' as the screensaver of his laptop. My first contact with this 'universe' was actually the computer game Space Hulk, and that's the very game this review is about. What an amazing coincidence!

The game is set against a war-in-space background: aggressive aliens, the Gene Stealers versus highly-trained human super soldiers, the Terminators. The player, of course, controls the side of the Terminators in quite an impressive number of missions. These usually consist of infiltrating a 'Hulk' (a giant space ship), clearing it of Gene Stealers, retrieving alien artifacts or merely getting out alive. 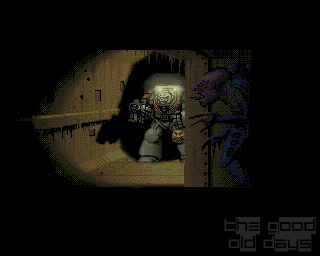 While a basic turned-based approached would have been the obvious choice, of course, Space Hulk uses an interesting concept of interruptable real time. The action can be frozen at any time, but commands can still be issued to the squad members (usually up to five; sometimes, you get to control two squads at once). However, this feature is of limited use. While frozen, the remaining freeze time is counted down. When it runs out, everything starts moving again if you want it or not. On the other hand, the freeze time replenishes slowly when the action is not frozen. This system allows for careful tactical planning on the one hand, but keeps a sense of urgency up on the other hand.

By virtue of this system and the generally well-done atmosphere, the game is always full of tension, even to the verge of being frightening and creepy. In this respect, it is one of the most immersive games I've ever had my hands on! 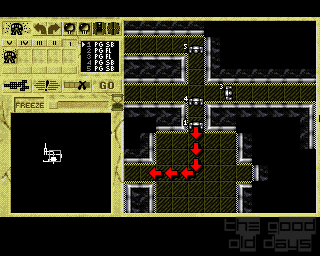 Careful advance while the rest covers

Yet, Space Hulk still fails on the whole. It is apparantely the concept of the game that the Gene Stealers don't have any ranged weapons, but are extremely deadly in close combat. Or the other way round: Once one of them gets near one of your Terminators, the oh-so-highly-powered guy with his heavy armor is useless. Although there even are weapons designed for hand-to-hand combat which Terminators can be equipped with (the inspiration obviously came from the Masters of the Universe here: it's Skeletor's Terror Claws and He-Man's Power Sword), even those are virtually useless, and as soon as you get to see one of the aliens in closeup in the 3D view, you might as well give up on that soldier.

The problem with this is that most missions are designed so that you have to move around the winding corridors. If an enemy is waiting behind a corner, that's it most of the time, because you'll be sliced up before you can even turn to face him. Even if you're just trying to block a narrow passageway, your technologically advanced gun will jam sooner or later (in fact, they seem to jam all the time), and when that happens, yet another Terminator is turned into cat foot. 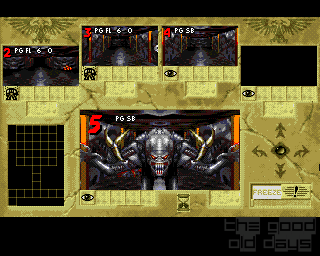 Worst of all, many of the missions seem to be designed in a very time-critical way. I.e. you don't have any time to take just one single wrong step at all. If you don't send your Terminators to the exactly right spots using exactly the right route, you'll find yourself in a rut within seconds. Usually, you'll have your soldiers standing back-to-back somewhere then, shooting dozens of Gene Stealers, but more and more will keep coming - and you won't be able to advance, because your target area is already filled with them (once again, waiting around a corner). Two options: Give up immediately or keep watching as the inevitable gun jamming occurs and your team is slaughtered.

So there it is. Space Hulk is a colossal failure. Very professionally made, a concept bordering to ingenuity, yet totally unplayable. This future is indeed very grim.

Mr Creosote (2008-12-07):
Originally posted by Wandrell at 14:51 on December 7th, 2008:
Automatic weapons always have the jamming problem. But then you see in 40k they use bolters, weapons that shoot small rockets instead of bullets, so I suppose they don't need an ejection system for the shells, making them less prone to jamming.
Ok, obviously, my previous comment was meant in a humorous way. I don't mind so much that the weapons are jamming, but that they do so all the time. Incubation has weapons jamming, too, but there, it's always logically explainable and (most importantly) foreseeable when it happens. Overload the weapon and it might jam - makes sense. In Space Hulk, you fire the first shot from your brand new weapon and it jams immediately. Right.
Originally posted by Wandrell at 14:51 on December 7th, 2008:
But for me the worse was the short planning time. A few seconds to plan what to do, and then the aliend horde jumps over you cleaning the ship of space marines.
As I wrote, I like the pressure this limited freeze time provides. However, I what about this: In the briefing, a map of the hulk is always shown (or the commander tells you the scanners didn't work, which would be a plot element for those specific missions then). That map, however, is obviously way too tiny to make out anything. It would make perfect sense if the player had the chance to study the 'map' in the normal tactical view before beginning the mission at all. I.e. there wouldn't be a ticking clock then. After you've pushed the start button for the first time and your Terminators are in there, the normal freeze rules would apply. I think that would actually improve the game a lot, and it even makes sense plot-wise (as sketched previously).
Wandrell (2008-12-07):

Automatic weapons always have the jamming problem. But then you see in 40k they use bolters, weapons that shoot small rockets instead of bullets, so I suppose they don't need an ejection system for the shells, making them less prone to jamming.

So it is just a balancing thing they made that didn't work well. But for me the worse was the short planning time. A few seconds to plan what to do, and then the aliend horde jumps over you cleaning the ship of space marines.

T-Pow (2008-12-07):
Originally posted by Mr Creosote at 23:04 on December 6th, 2008:
Anyway, back on the topic of the game itself, we all seem to agree that it is no good. I really find it ludicrous that this technologically advanced elite squad consists of useless goons with crap weapons which jam all the time. You'd think after 40000 years, they could at least have got rid off that jamming problem. Silly.

Some problems seem to stand the test of time.

By the way. There is a new Warhammer 40k game "Dawn of War". It has three expansions from which two are standalone.
It´s a sort of real time strategy game with focus on the troops and a second part will come out perhaps next year.
Published by THQ. So I think they have the license now.

I doubt they're really concerned about their own Space Hulk computer game. Usually, those problems arise because of trademarks or because of licence options (licence to produce a new commercial game I mean). They don't want freeware competition should they ever decide to release a new computer game themselves, and they also don't want anyone using their trademarks without payment. I'm not saying it makes sense, but that's the story of numerous fan-made games (just read up on the Ultima inspired fan games, for example).

Anyway, back on the topic of the game itself, we all seem to agree that it is no good. I really find it ludicrous that this technologically advanced elite squad consists of useless goons with crap weapons which jam all the time. You'd think after 40000 years, they could at least have got rid off that jamming problem. Silly.

I really had high hopes for the game when it came out and couldn't wait to get my hands on it. A friend of mine bought it, I... 'borrowed' it from him. Remember it like it was yesterday: huge disappointment.

Wandrell (2008-12-06):
Last time I checked they still had the game. What a loss, but ironic how Games Workshop leaves all the small games because it gives more money making expensive and low quality miniatures for Warhammer and Warhammer 40k, along with bad paints and complements, yet they still are worried about their old games.
Mr Creosote (2008-12-06):
Quote:
Downloads of the game have been removed due to legal / license issues. We are working on getting the game approved, until then the downloads will be offline.
That's from March - doesn't look too good.
Wandrell (2008-12-06):

I never played much this game, in the 40k universe the marines are supposed to be scary superfascist marines based on Starship Troopers (there are no good guys in 40k, by the way). But here, their super-super marines just are good at dieing quickly.

But there is (like with Heroquest) a fan made version similar to the board game: http://www.teardown.se.

Yeah. I remember this game. It had a lot of good ideas but they should have left it turn based.
I played it that days for max. 3 hours and hated it. Never got further than the third or fourth level.