Rescue: The Embassy Mission
for NES 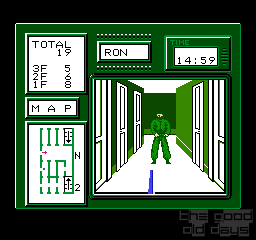 I suppose everybody knows the famous SAS rescue operation on the Iran embassy. Well, here is your chance to do something similar, as this one is based on it. But don’t expect anything spectacular, or even tactical, as the idea ends just on a small set of action games.

It goes always the same. Different difficulties and a few levels to choose, but it never changes: placing snipers, sniping and assaulting the embassy.

So first you get those snipers in place. For some reason they only can get to their places walking the street in front of the embassy, and this obviously gets the bad guys attention quite easily. They have a small defence system in place for these cases, a lot of spotlights sweeping your sniper’s way. Touch one of them and receive a shower of bullets.

This part consists on hiding from the spotlights by jumping into windows and doors, or by rolling through the spotlights if you feel lucky, until you reach the correct position, which is just another door or window, nothing fancy, so keep looking your map as you map or you can walk past it.

Once you have them ready, the assault squad arrives. No, there is no tactical assault of any kind. Just three guys taking turns to climb down on ropes. Basically, they are your three lives. But before sending any of them you can take a look at the building with those snipers.

Each is facing one of the three walls, and their job consists on watching windows and shooting shadows. It seems the people on the embassy lacks any learning skill, as no matter how many you manage to kill, from time to time another one will pop around.

But that is boring, after all the windows are mostly empty. The meat here is getting one of the assault squad members into the building. Not because it is the most fun, but because learning again how to move these guys on the rope without making them fly like rocks is the hardest part of the game.

And then, once you get to kick the first window things get easy. Now it is just running around rooms kicking terrorist butts. There are some hostages around, but as long as you just shoot the enemies all will go smooth and in a moment you will end on the debriefing.

Quite long for what it is, I loved this game as a kid but it didn’t survive time. It is quite simple and fast, the charm of NES games, but too simple and at the end you feel just the assault matters, and the other parts of the game are just to make levels last more.

Wandrell (2009-01-04):
Well, once you learn to play it is quite easy. It is not like there is any complex part, there are just the control problems. Really it could have been much better with some changes, but after all this is the NES version so maybe it is watered down, I've never played the computer version.
Mr Creosote (2009-01-04):
I played this on the Amiga under the title 'Hostages'. Always found it rather intriguing concept-wise, but never really learned to play it properly.
[Reply]