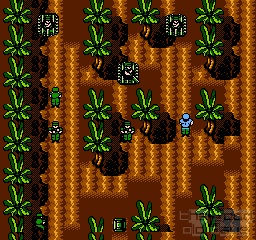 Hail the heroes of the revolution who came to save the island (an island which is suspiciously similar to Cuba) from the military dictatorship. Two guys that aren’t Castro and el Che, even when they look exactly like them, but who surely are a pair of one man armies.

I must say the similarities are only in the European and American versions, in the Japanese original these two guys don’t look like them, they are Castro and el Che. But these things used to hurt Nintendo of America, the guys who would censor even crosses.

Anyway, it doesn’t matter if it is Cuba or not. What we care about is that this looks like an R-Type kind of game, even though it is a shooter. Enemies moving around continually, shots everywhere, and continual action and non-stop deaths (luckily they give you infinite continues).

Yes, run of the mill kind: you walk around the place, killing soldiers, getting upgrades and rescuing prisoners. But it is an action filled and fun game, where enemies keep arriving from everywhere, and there are non-stop shoots.

And both you and the enemies have the same resistances: one shot and dead. Luckily there are some things on your side, starting with a pocket always filled with grenades, and being able to get into the enemy’s tanks.

I bet you say “Not only this is run of the mill, but also from the NES. Don’t they have just downgraded games and simple platformers?” Well, not this time. Here you have a game filled with action, one of those games that have nothing more than enemies to kill and things to kill with, but that gives it all on a fun and simple way.

Oh, well, sometimes it is hard to talk about shooters and not repeat the same as always, so I’ll point what stays in my mind from the game, the levels. They really made sure there is constant action on them, soldiers popping around in various ways, preparing to resist your advance, or just trying to trap you, reinforcements suddenly appearing from the river, soldiers trying to move prisoners away, enemies using prisoners as barricades or just pigs scaring away enemies.

It is, but for some reason made me think on R-Type (maybe because I preffer that kind of shooter), also it sounds different from the usual.

And also, I've added the similar games to the game page.

Mr Creosote:
R-Type? The description sounds a lot more like a game is the style of Commando or, as for on-site games, Dogs of War and Wanted.
[Reply] 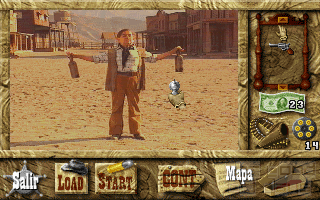