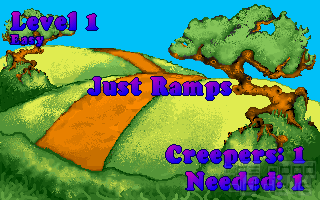 Sounds much like a Lemmings clone? Partly, because unlike in Lemmings, you don't give your fosterlings special abilities, but you change the environment through ramps, ventilators and other things. So Creepers is a mix of Lemmings and The Incredible Machine. Sadly the number of tools is very limited (there are only 13 different ones) and some of them are only variations of existing ones, like ramps in 2 different directions.

The game can be paused at any time to get an overview of the current situation. But while paused, you cannot use any tool. So good planning and implementing your thoughts at pace are the main task because the caterpillars will come crawling into death very quickly. The number of tools which can be used in the current level is very limited and never contains the whole repertoire. Aside from that, there is energy which is consumed every time you use a tool. To win the current level, you will have to get the desired number of caterpillars into the bowl and you need 100 energy left to start the transformation into butterflies.

One neat little aid is the point camera which can be placed on every spot in the level, to keep an eye on this array in an extra window. This is the only aid which doesn't consume any energy and can be used as often as you want. The racket which can be used to get the creepers into rolling mode so that they move a lot faster costs 100 energy, any other tool costs 200 energy. Every level starts with 5000 energy so you have to use your aids wisely in later levels to have some spare energy at the end of the level or you won't be able to win.
In spite of the small number of different tools and the often very obvious level design, Creepers is a nice little puzzle game, but due to its low degree of difficulty it's suited only for beginners or younger children. 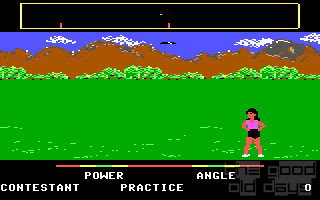