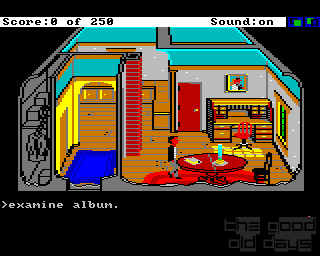 Jerrod Wilson, a journalist living in 1848 Brooklyn, apparantely never got over 'losing' his brother Jake who was forced to leave town ten years ago. Now the protagonist receives a letter from this lost relative. Jake has found gold in California and he urges Jerrod to join him there. And it would be much of a game if Jerrod didn't go along with this...

Gold Rush has some interesting things in it. For example, in the first episode (Brooklyn), the game tries its best to make the city look alive. Carts are driving along the roads, people are walking around carrying on their business. The game's highlight is the travel episode. There are three alternate routes you can choose from and each plays differently. Much appreciated! 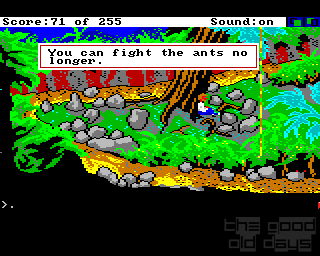 ...and I can fight the game no longer!
Unfortunately, Gold Rush is also cram-full of the typical Sierra sins. It all starts with those carts which will mercilessly run you over if you don't jump off the road quickly enough. Similarly, many puzzles deal with ludicrous lethal situations in which you have a few seconds to decide something to escape or you're dead. Of course, there is no option to retry - better have many saved games ready.

Another problem with the puzzles is that almost all of them are completely backwards. I.e. you have to use trial & error, fail and retry. Everything. For example, on each way to travel, you'll need an item in order to avoid being killed. However, you'll only know what to get back in Brooklyn after you've died on the way once. Many scenes even involve time limitations. For example, take the first episode once again: After about 15 minutes of real time, the Gold Rush will increase the prices by so many times that you won't be able to buy anything anymore - game over. Arriving in California, you might find the stage coach which is supposed to take you further has already left - game over again. And so on. Nothing you can do to avoid this really. It may be realistic, but it's no fun. 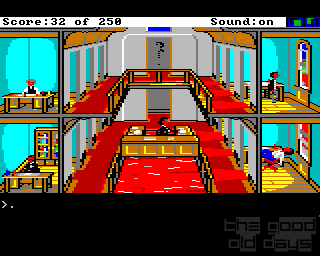 No, the guy in the office on the bottom right hasn't been stabbed
As usual with Sierra, the parser is quite problematic (dumb), objects which can't be seen have to be searched manually all over the screen, the player's sprite is painfully slow even in 'fast' mode and the graphics are quite ugly. Ever seen a city which has rivers of blood instead of streets? Here you are! To make things even better, the same colour is used for people's skin.

In spite of those certain qualities mentioned earlier in the review, Gold Rush is once again an almost unplayable game from the worst Adventure-making company ever. Pity.

Moebius:
Quote:
Because all my save games will then be from a point after deciding to buy the magic carpet, which now proved worse than useless after being magically transported to the submarine, instead of the periscope.

That's why there should be many saves, and preferably made prior to your making any decisions which may ultimately define your destiny.

Quote:
Falling down flights of stairs are a staple in the King's Quest games, particularly #3 (the one with the annoying wizard; truly one of the worst procrastination devices preventing well-earned gratification for no reason at all)

I played it of course, though i still don't remember falling off the stairs (i don't argue against your statement, i just can't recall it), yet it can be explained. I believe it was extra up to difficulty since time was crucial in that episode and you had to have certain things done until the return of Manannan, so a little bit of extra thrill doesn't really hurt. Yet i might be mistaking, i can't remember exactly how it was.

Quote:
and #4 (where you have to walk up and down a circular tower repeatedly).

Hm.. yes, i do recall that was a little tedious, i have to agree. Then again, that's a perfect example of the said dramatic boost-up, which somehow appeals to your feelings for the character and encourages you to be more caring i suppose.

Quote:
And if you didn't play Space Quest, I can only congratulate you – you saved yourself the worst!

I played SOME of it. I believe i finished 1st and 2nd, but got stuck on 3rd i think and from that point onward never proceeded any further. Still, i can't remember any particular annoyances in 1st & 2nd.. to be fair, i don't remember anything at all

Thanks for the article, will give it a look later on. I have seen it before though, only lacked motive to look into it closely.

P. S. I have just remembered the stair issue in KQ3. It wasn't fatal though as far as i recall, you just get stunned and temporarily out of order. Well... that was fun

Seems like a good opportunity to plug this formerly popular article about death in adventure games. So, yes, I agree that it is necessary at times. I don't mind it if it is there for reasons of drama. I object to it if it is clearly only there to make the game appear longer (similar to mazes).

I don't even want to get into the discussion of whether saving/restoring is harmful to immersion in general. As to why I don't just save to avoid being forced to replay, it is nevertheless easy to answer: Because all my save games will then be from a point after deciding to buy the magic carpet, which now proved worse than useless after being magically transported to the submarine, instead of the periscope.

Falling down flights of stairs are a staple in the King's Quest games, particularly #3 (the one with the annoying wizard; truly one of the worst procrastination devices preventing well-earned gratification for no reason at all) and #4 (where you have to walk up and down a circular tower repeatedly). And if you didn't play Space Quest, I can only congratulate you – you saved yourself the worst!

Moebius:
Quote:
Motivation through punishment rather than reward. This doesn't work at all. Throughout most of their life, Sierra never got away from the basic treasure hunt formula of the 70s, where any (ridiculously small) payoff would only come at the very end – usually something along the lines of "well done". So you get constant negative reinforcement, but hardly ever any positive.

Can't agree on that one. First off, there weren't that many persistent traps and pitfalls, you're clearly exaggerating. MOST i would actually have to discover myself and, as previously mentioned, solely out of sheer curiosity, to see the rest of what game authors had concocted. I consider it a toil worth admiration. "Well done"? There was often an animation sequence, and quite bulky too, unless you're talking about the earliest Sierra games, which weren't that spectacular in the first place. But usually most of them provided a somewhat satisfactory epilogue of a considerable length.

Quote:
A game is different from real life. In Sierra games, the deaths make you repeatedly replay vast sections which weren't even all that interesting to begin with. This relegates you to mundane repetive tasks and again keeps you away from the positive payoff.

Well, that's what they made the saving feature for, right? Why would you replay something over and over, unless it's an arcade segment which temporarily renders it impossible? I don't know, it seems like you're being a little too captious. Would you really be interested in a game where you can't die at all? Don't you wanna know at least that it's possible for you to lose? Or perhaps it somehow thwarts your inner scenario which is supposed to run smoothly and without a hitch? Well, then i'm afraid you're being a little too sensitive, and my advice here would be: Restore'n'Forget

Quote:
Realistic? When did you last fall down (to death!) a perfectly normal flight of stairs? Happens constantly in Sierra games.

I can't really remember any of that, but what i can say with full certainty is that it didn't perturb me in the slightest

Quote:
Avoidable? Many of these deaths cannot be foreseen at all. When I want to cross a street in real life, I can look left and right before I do it. Impossible in Gold Rush due to the game mechanics. And don't even get me started on Space Quest!

Well, you know what they say, shit happens. But again, i believe that's called entertainment factor, a surprise if you will, so if you're such a genius who avoids all the booby traps, then how the hell will you ever know of any?

We didn't work so hard for you to just ignore 20-30% of it. But speaking seriously, i think what the Sierra developers really wanted to hint at is... Save often. Btw, Space Quest is one of those few Sierra adventures that i didn't play much due to my lack of interest for the whole subject used. It just didn't enthrall me from the very beginning.

Anyway, you know, you should more often look on the bright side of things, at least it's funny most of the time how your character dies, so why not have a good laugh at it instead of getting mad as a hatter? I mean, seriously, the toilet accident in LSL1 is worth a giggle, you gotta admit it

And i'm personally no masochist, i just think it's boring playing a game which isn't even a game, but a fail-safe, death-proof and simply flawless script which you will inevitably play out sooner or later by just clicking around, and your biggest drawback is confusion. That's just boring, if you ask me. I can't say i didn't enjoy Day of the Tentacle (one of those perfectly deathless games), but... i much prefer some realism over it, or pseudo-realism if you will, but not an interactive cartoon with zero fatalities. That's not the way i roll. So let us leave it as a matter of personal preference, shall we, and spare the overbearing criticism

Mr Creosote:
Originally posted by Moebius at 00:35 on July 9th, 2015:
I don't understand why people here are so fixated (and often negatively) on certain fatal accidents used in Sierra games? It's what makes up the realism! Besides, it's not that difficult to avoid it, is it?
To name just a couple of points:
To sum up, it's just shoddy game design if random deaths are the only thing which keeps you away from the ending.
Moebius:

I don't understand why people here are so fixated (and often negatively) on certain fatal accidents used in Sierra games? It's what makes up the realism! Besides, it's not that difficult to avoid it, is it? And you may find it funny, but when i played this game i actually had to deliberately get in the horse's way to see what happens, cause it would never occur naturally. And honestly, i loved all those things natural, especially day & night shifts, which sadly wasn't used in too many games.

Speaking of playing it, i never actually finished it. Yes, i solved all the puzzles while still in Brooklyn, took off on the steamboat, picked the right horses, but i got stuck in Sacramento with a shovel and other gear and i would walk aimlessly back and forth, dig here and there, but found neither gold nor Jerrod's brother. Today i'd probably finish the game, but the thrill is long lost, and the best i could do is write a review on this and many other games i will most likely never play again

Mr Creosote:
The game design is actually sadist - the players would have to be masochists

"It all starts with those carts which will mercilessly run you over if you don't jump off the road quickly enough."

Sierra's masochist game design still surprises me. Anybody who played King's Quest, Larry or any other of them has tales of how the game punished him, repeteadly. 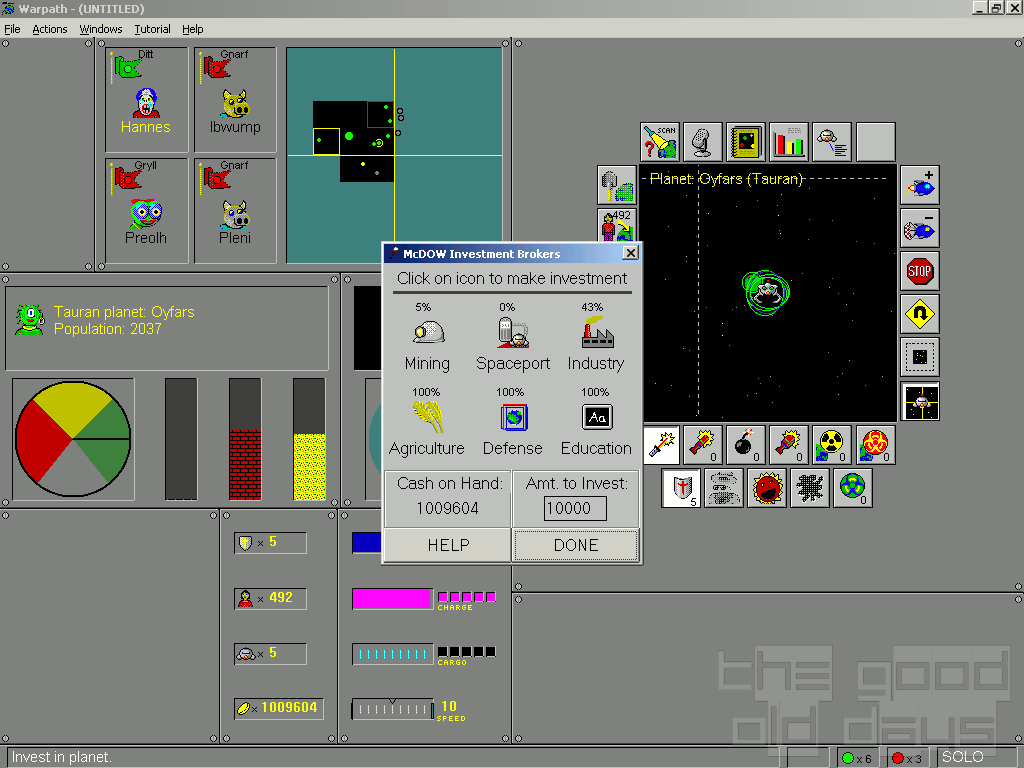