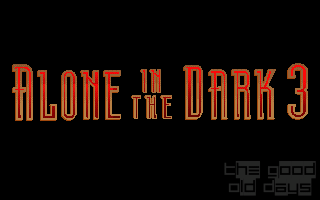 When people start filming a western the local cowboy ghosts seem to dislike the idea and start causing mayhem. The only solution is calling Carnby, who will come, kick some asses, solve absurd puzzles and save an old friend.

I didn’t recall Carnby was such a tough guy. Well, it’s just on the intro, and maybe it’s thanks to the voices. Still it’s the first symptom of the game’s illness, and overdone series, or maybe just lazy and quick design.

Just look at the story, this is about ghosts, cowboys and some kind of Indian artefact, and probably something else which I didn’t get. I nearly didn’t even get the green mineral is uranium, I still don’t know what the golden eagle nugget is, and I’m pretty sure the Aztec empire didn’t reach California.

I hope you didn’t get what I’m talking about. Neither do I. With those absurd twists it ends looking like a lot of scrapped plots sewn together. You just have to take a look at the last part, with that turn to weird technology that lacks any sense.

So you have a bad story. Add to it somewhat ugly graphics (too often those 3D models are a confusing mess of colours) and the linear game, the only nice thing that is left are the controls. Way better than the human-turrets of the Resident Evil saga this series would father.

Wait a moment, I didn’t talk about the puzzles. Well, saying they are linear says everything you wish to know. “This is an adventure game and there are supposed to be puzzles and adventure”, they thought, and so they added fights and room after room with some kind of puzzle.

One room after another, like you open a door and enter into another puzzle (it literally happens some times). And I say puzzle because they are quite puzzling, who could have thought it was a sensible solution dropping a night valet to make an stupid goon fall to his death?

It may be fun at the beginning, but it becomes more dull and silly as it goes. Also a game that makes me look a guide to find a silly solution can offer a limited fun.

I've barely played the second again (for some reason I always leave it pretty soon each time I try it again), but this one is quite a leap from the first. You end getting bored of being moved on rails around, the first was good for the freedom to explore the mansion filled with horrid deaths, not for beating undeads with your fists while running to the next door.

And I can't say it enough. The story is completely random. When I reached the end and found that laboratory I got completely lost, and I didn't get the uranium part after finishing the game, anyway I still don't get why they wanted to blow up California when ten minute sooner they where trying to steal the money you stole just because it was on your way.

Re. the 'overdone series', I have to agree. They really couldn't keep it up after the first game. Even that one probably isn't brilliant, but with the novelty of the graphical engine gone, there wasn't much left in the series.

However, in this particular game, at least they tried. The Jaguar scene is actually a good idea, for example (gameplay-wise, I mean - story-wise, it's another disaster).