The Oregon Trail
for PC (DOS) 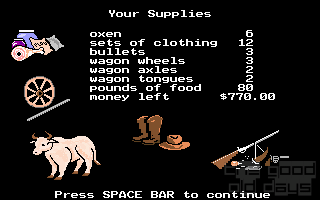 You are bound to Oregon, a city of the west where you hope to start a new life. In the most boring way possible, just as this game is just about travelling, of the most boring and accident prone kind possible.

There is no wild on this west. It can be dangerous, maybe a bit savage, but there is nothing thrilling on going with your cart days on a row hoping something happens at last.

Only one thing breaks the monotony: the landmarks. Usually rivers, other times a city, sometimes just a landmark. There you can trade, talk and see if your cart sinks to the bottom of the river when trying to cross it.

Ok, you can do a few things but nothing funnier than sinking carts with oxen included. Only second to hunting random animals to find you have to leave dozens of dead animals rotting, just because your arms are so weak they can’t carry the buffalo herd you shot down.

Can you believe this is nearly all the game? What else can I tell without scaring you away? Nothing, it’s terribly slow. Get to a river, cross. Get to another river, cross. Find landmark. Arrive at city, buy what you did lose because somehow the cart did catch fire and repeat until dysentery hits and releases you from this travel.

It may be an educative game, but games should on first place be fun. No matter how boring the real thing was, kids won’t stay around long for this, I say.

But somehow I’m wrong. Oregon Trail, for those who don’t know, was quite popular on USA schools, which makes this game some sort of cult old game there. To me it isn’t up to what people seems to think on it, so we may be at a case of nostalgia.

Lacking that, the nostalgia, it’s just boring. If you are at a school on the eighties with nothing else on the computer this of course can be a great game. Otherwise it gets too monotonous and boring.

Wandrell:
To show I'm always right: here is Windows 3.2. Ok, I found it on a quick search and probably is just bogus or a mistake or any silly thing, but now I've become chinese just to keep on the side of rightenousness.
Mr Creosote:
Wow, Windows 3.2? You've got a real rarity on your hands there - I don't think even Microsoft has got that

Wandrell:
I must say that it's better than the remake for Windows 3.2 (I can't find an ISO for it, by the way, just the CD content zipped). There the travel is really slow. I don't know of they wnated to make each section of the travel proportional to what it really takes, but reaching any place can take a painfully long time.
Mr Creosote:

You'll burn in hell for this heretic review! After all, this is officially one of the greatest games of the whole decade!

On a serious note, I do like the fact that you can't just kill a whole herd and live off it for the rest of the journey. An important lesson about overhunting which doesn't detract from the fun of the hunting sequence at all. 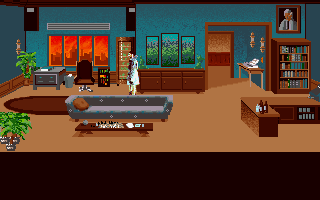