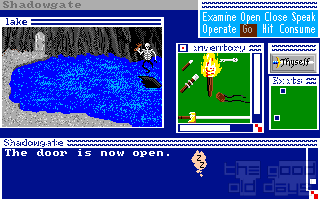 It seems there is no fantasy world in which people can live happily and undisturbed by huge threats. This one is no exception. An evil warlock is trying to summon a mystical monster – the Behemoth. You impersonate the good hero who has to stop him.

To succeed, you have to find the Staff of Ages (which is supposed to keep the Behemoth where it is). As usual, the powerful artifact is not readily available from a showcase of some private collection, but it's hidden deep in castle Shadowgate. And of course, this castle is infested by the warlock's demons and vicious traps.

So… fantasy - another classic theme covered by Icom's adventure games. Not exactly my taste, but it undeniably fits well in row with Deja Vu and Uninvited. Unfortunately, there is more difference between the games than the plot. Shadowgate is not only subjectively inferior because of its theme, but also objectively because of its game design. Dying is possible in the other Icom games, too, but not to such extremes! Deja Vu lets you live most of the time. Uninvited at least gives you a chance to forsee the dangers in most cases. Shadowgate is just cruel towards the player: it lets him die for entering a room, for picking something up, for pulling an unmarked switch and a lot similar actions. It's horribly frustrating!

To make matters worse, the time limits have been tightened. Again, the comparison with Icom's games from the same time: Deja Vu and Uninvited limit your number of turns on the whole and additionally in certain situations which require quick action, but it's always within limits (the limits are within limits…) and in a way predictable. Shadowgate doesn't only have the usual overall turn limit (which is alright), but it (literally) lets you stumble in the dark most of the time, as you need torches to light your way. Torches are not only limited, but rare. What is the consequence of standing in the dark suddenly? Dying of course. Did I already mention how frustrating the game is?

Shadowgate unarguably is the worst of Icom's games. Sometimes, the company's typical qualities shine through, but every time you're about to appreciate the game, you die another unpredictable death. Game design replaced by idiocy. Definitely not a game anyone has to play, only interesting from historical perspective and for the sake of completeness. 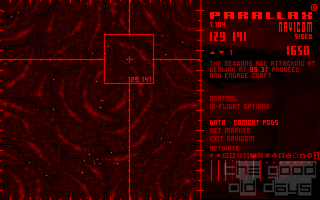