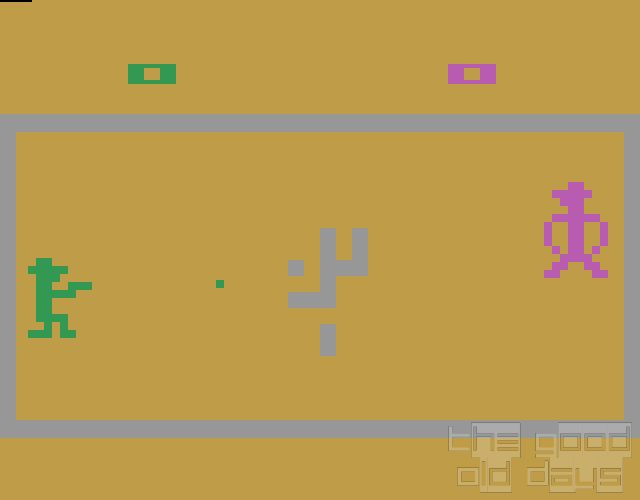 And that simplicity makes it incredibly hard to describe. They have so little, and that is part of their charm. You can play five minutes to them and you have played them fully.

So I will start for what first hits you when playing, this is a two players game, with no AI whatsoever, as usual with old Atari games.

Usually multiplayer is great, but only multiplayer isn’t so. People expects to be able to play their games whenever they wish (even if that means suffering a single player placeholder). At least my Atari came with several games bundled, so I didn’t got stuck with this problem.

But enough ranting, you are here to hear about bullets bouncing on the screen. Everybody loves it, you shoot, the bullets bounce on the walls and then hit the bad cowboy. Shooting and moving away from shots, that’s the secret.

Why can’t I just shoot forward to the other guy? You think, because there is a cactus. Ok, a cactus is not a great problem, a few bullets and it is done. But what about a wagon? Or better, a moving wagon. That won’t care much about you shooting around.

So with a small selection of screens shooting square bouncing bullets became something interesting and fun. Can you imagine? This is a game from the 78! That’s like hellish old for game standards. And it’s fun, even though the guys look like stick figures (after all, they are stick figures).

I know some people who would raise both brows if they saw me playing this, but still graphics and age mean nothing with well done things. And this is quite a nice and simple game.

Wait a moment, did I say there is no single player mode? Well, that is a misconception. You have a target shooting mode, with a moving target, which only lacks the screen with a wall on the middle, and the bullet limit handicap you can choose on two players. So it is like a sad compensation just in case you don’t have anybody to play with.

Tuss:
Outlaw is an arcade port to the 2600. The Atari arcade game ('76) itself was a rip off of Midway's Gun Fight. Another variation on the theme can be found in the gory Showdown in 2100 AD for the Magnavox Odyssey
MoldyOldie:
In 1978 this was about all there was if you couldn't leave the house. Not much different from any other Atari shooter. Try to goad your opponent into a vulnerable position while maintaining a safe place for yourself. There is a modicum of strategy. Don't waste your bullets because you can't reload until your opponent runs out too.
[Reply] 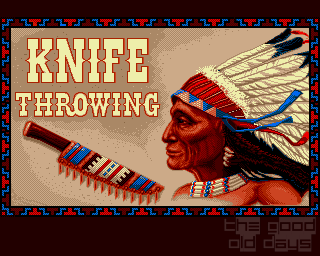