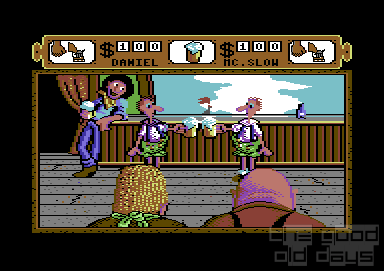 When Mr Creosote told me about the “Western” theme the site was going for this month the first game that came to my mind was Western Games. Not that that game would have been one of my favorites or even one of those I had played a lot. But I did remember there was something... some game from the “Games” series. When I spoke to Mr Creosote about it he suggested Bar Games, but that wasn't it. Soon the right game was found though and I sat down with it.

So what should I say? First I'd guess you know about the concept of the ... Games, Summer Games, Winter Games, World Games and so on. If not, well maybe this is not the ideal one to start with, but now that you're here just go on reading. You'll get the idea soon enough.

Western Games basically consists of six little games which you can play alone or with a friend. If you choose to play alone you play against the computer. It's your choice whether you want to play just one of the games or all of them in a row. The games all consist of a little competition that the makers of the game seem to associate with the wild west. The little games can be compared to little browsergames you can play nowadays. Just simple little things. I have to say in advance that I didn't really like a single them, but there are differences. Some of the games are playable, even amusing, while others are not - neither playable nor amusing.

But let's go through them all:

Armwrestling: This is not a bad game once you get the general idea. Pull the joystick at the right time. Easy, but still mildly exciting. You are supposed to be able to cheat here (within the rules of the game) by propping up your arm when the referee doesn't look. I didn't manage that, but wasn't bad without it either. For an easy idea like this the game is made up very well and has nice atmosphere. This one was my favorite (if you can speak of one) among the subgames of this game.

Beershooting: This was not so bad either. It basically follows the concept of a shaking hand. It's not so easy to move the the crosshairs where you want them to. Sometimes it goes too slow, sometimes too fast, but you can make it. No bad solution for a shooting game like this. It's really not bad, just gets dull after a while. It's a bit random whether your opponent hits or not, so sometimes you don't win with a really good fast shot and sometimes you do even though you were really slow. But after all, still second best of the games.

Quidspitting: This one still belongs to the playable games. The idea is to bite off, chew and spit. The spitting part is a bit like the classic tank wars where you have to determine angle and power and then shoot. It's the same here. So in theory this could be good, but it wasn't really. I couldn't seem to hit. It was frustrating, but maybe I was just not good. So this game has at least some potential. I have to add though that the atmosphere of this one just isn't so great. Spitting is disgusting. Maybe I'm getting old, but that's my opinion. I didn't like this one very much.

Dancing: The lady dances and then you go and dance the same. Every joystick movement has a dance-action assigned to it. I just didn't find it worth the effort remembering them, but I gave it a try. The first round just has two moves. But anyway - I couldn't get them right. I guess it was my timing, but after a few tries I just gave up on it. I am not sure if this game is really unplayable, but I would have said the first round should be doable without TOO much effort. In the end this one's just not my game.

Milking: Okay, things are getting gradually worse. I have the manual, I even READ the manual. I know how this works. Too bad the game doesn't. Not a single drop of milk. This one's one for the unplayable-category. It doesn't even get bonus points for the idea. I mean... it's milking...!

Eating: A better one for the end. This one works. The main thing is to not lose too much soup on the way to your mouth and to drink regularly. This game has potential, but it could have been made a bit better. I didn't find the controls to work so very accurate. Maybe I was tired of the other games, could be possible, but in the end I was frustrated with this game too. But at least it's playable and - compared to the others - has a bit of a concept.

To sum things up - most of the games just follow the concept of “push joystick into direction a, direction b, push button, push joystick and so on”. No thinking, no reaction. Beershooting does a bit more than that, quidspitting and well... maaaayybe armwrestling does too. The game does have nice graphics and the feeling of it is way better than its concept. I have to say though that I wouldn't really recommend this game. It's not exactly a huge download so go ahead and try it. But don't be disappointed.

Thanks to http://eager.back2roots.org for the manual. 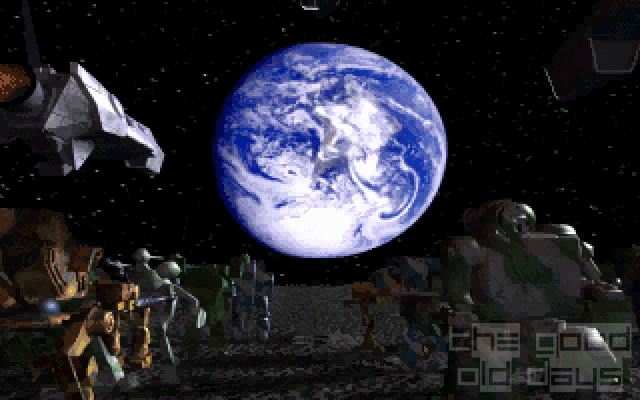