The Hollywood Murders
for Interpreter (Alan) 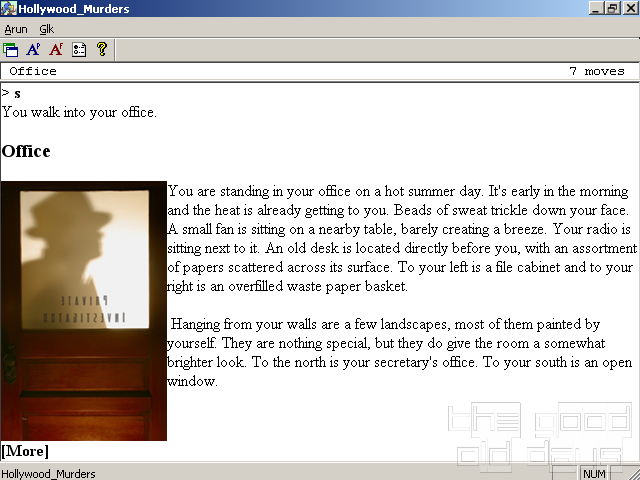 A game for Chandler fans: a private detective hired by a seductive 'dame' to find her husband who disappeared a few years ago. Of course, it's not as simple as this, and as you dig deeper into the shiny world of Hollywood, its studios and the people behind them, it all culminates in a number of grisly murders.

For those who have read the review on Michael Zerbo's The Child Murderer, let's first get this over with: The Hollywood Murders is nothing like that former game. None of the problems mentioned there occur in this one. The writing is decent, with a clear storyline which unfolds in a logical order and pace. And there is also no confusion as to what the game is genre-wise: This is a pure text adventure with a classic parser engine. A big surprise considering how little time passed between making these two games. 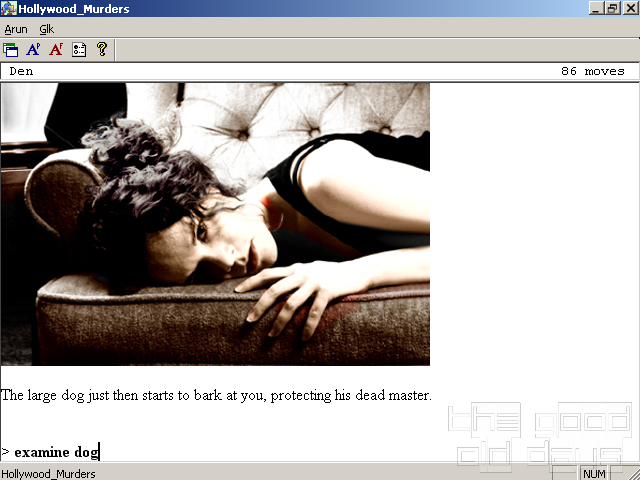 Hollywood Murders with graphics
That is not to say there aren't any graphics. There are (as well as occasional sound effects; both were added in the 2006 update of the game), but they only complement the actual text-based game - which can also be played in pure text mode. The images used in the game have, of course, not been produced exclusively for this game, but they still have at least some consistency found rarely in freeware games.

The game isn't very long (but quite adequate for a freeware game) and it's divided into episodes (or scenes) put in a linear fashion. One typical effect of this (which is also occuring in Hollywood Murders) is that some of these episodes only have a few locations, and so it happens that objects appear just one screen right next to the one where you need them. This makes much of it easy, and thus very suitable for beginners.

If you're looking very hard, you might find one or two dead ends, though those are very easily avoided. For example, one involves leaving an object in the first episode which is lying directly next to another object which you need to advance. There is no reason not to pick up both. Another one becomes apparant immediately after you've committed the wrong action, and the parser has an undo action. So no complaints there. 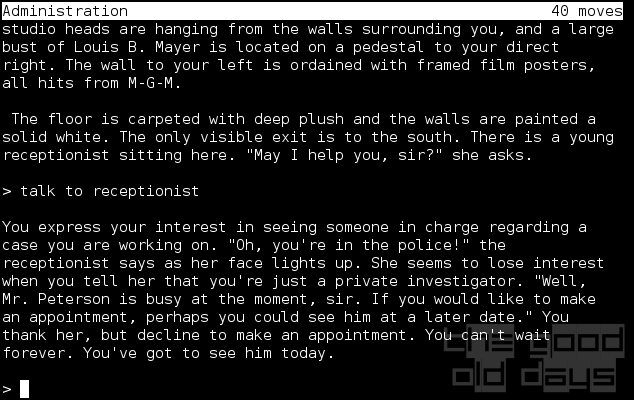 Hollywood Murders in text mode
The Hollywood Murders is an entertaining game for a quiet evening - or even a slow day at work, though playing in text mode might be advisable then. Wouldn't want your boss to immediately catch you playing a game just by a quick glimpse on your screen, would you?

Technical notes: Since the game was written using the Alan engine, you can play it on at least MS-Windows, Linux and MacOS (you might want to watch out for interpreter versions for other systems on the official website or at the IF Archive). The latest version of the game (1.5, dated 2009) requires an Alan 3 interpreter. The capabilities of these interpreters vary - on some, you will get graphics and sound, but some will be text-only. In any case, the game will always be playable and finishable. The other downloadable version has been pre-compiled for Microsoft Windows and it includes a suitable Alan interpreter. That version should be completely hassle-free, and yes, it does have graphics and sound.